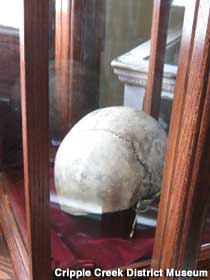 James Roberts was a miner in Cripple Creek, Colorado. He died on Christmas night, 1901 — whacked on the head by the butt end of a Colt .45 revolver. The killer was caught, but his attorney argued that Roberts’ death was accidental, because Roberts had an abnormally thin skull. As proof, the lawyer had the top of Roberts’ head sawed off and presented as evidence. This worked, somehow; the killer walked free; and for the next 100+ years the skull sat forgotten in the local courthouse evidence room.

A court reporter found it in 2010. She convinced the courthouse to give the dainty skullcap to the Cripple Creek District Museum, which now displays it inside of an old glass-sided ballot box. “He fits perfect in there,” said museum director Jan Collins. “You can see just where he got smacked in the head with that gun butt.” 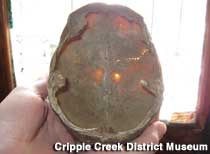 Jan told us that the museum eventually wants to bury the skullcap with the rest of James Roberts, but that his grave has been lost and may never be found. We asked if that was just a way to ward off potential museum visits from an angry, tender-boned wraith. Jan laughed and said no, since the museum — an old train depot — is already haunted by multiple ghosts and “kinda creepy enough on its own merit,” particularly at night.

In addition to the abnormally thin skull of James Roberts, another Colorado museum displays a skull chip from an Alferd Packer cannibalism victim in Lake City. Jan was tickled to hear that her museum was not the only one in the state displaying historical human body parts. She said that although she never, ever wants to touch the abnormally thin skull of James Roberts, she does try to appreciate its merits. “It’s pretty cool,” she said of the skullcap. “It’s clean.”

500 Bennett Ave., Cripple Creek, CO
Directions:
On display in the Cripple Creek District Museum. On the east side of town, at the corner of Hwy 67 and 5th St., where east-west Bennett Ave. turns and becomes north-south Carhanate St.
Hours:
Daily 10 am -5 pm in summer; weekends only off-season. (Call to verify) Local health policies may affect hours and access.
Phone:
719-689-2634