Roadside News: The Ides Of March 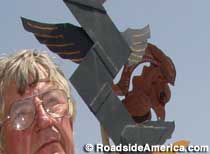 • Ricky Ranger, Crucified! M.T. Liggett, crusty Mullinville, Kansas, folk artist, has stirred up trouble with a new sculpture. It’s of Ricky Ranger — the mascot of the neighboring town of Greensburg — nailed to a crucifixion cross (And Liggett placed it on a road entering Greensburg). The town claims that it’s a “sign” and that it can be removed; Liggett says it’s “art” and cannot.

• Tanks, But No Tanks: The AAF Tank Museum in Danville, Virginia, got a scare when a senior citizen announced that he wanted to “make a donation,” set a mysterious package on the floor, and then walked out (It doesn’t sound scary to us, but a tank museum has to be careful). A local bomb squad was called, the museum was evacuated, and the package turned out to contain a 1922 French Hotchkiss 8mm light machine gun. Now the museum is wondering who the man was.

• Pedal Car Carhenge: The Durham Museum in Omaha, Nebraska, has opened an exhibit on American vacations — and its eye-catching centerpiece is a small-scale replica of Carhenge made from beat up old pedal cars. The cars were collected by octogenarian Bill “Speedy” Smith, and they’re also staged in dioramas visiting a kiddy-car-sized Grand Canyon, Mt Rushmore, and Kennedy Space Center. The exhibit runs through May 2.