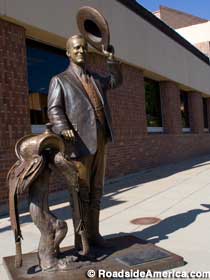 Throughout the month of February 2010, handmade scarves began appearing around the necks of Rapid City, South Dakota’s downtown display of life-size bronze presidential statues. This cowl play was perpetrated by a mother/daughter duo of renegade knitters who elected to strike the “City of Presidents” with a form of cheerful transitory graffiti known as “yarn bombing.”

Eileen Ternahan of Rapid City, and her daughter Joleen Klubek of Portland, Oregon, draped selected statues with the wintry wraps, resulting in a cozier Calvin Coolidge and a far fuzzier FDR.

“Yarn bombing” is an international public art movement where needle-happy outlaws adorn everything from park  benches to telephone poles. Some endeavors are officially sanctioned public art projects, like the 69 knitted parking meter cozies that brightened up Brooklyn blocks in the spring of 2009. Magda Sayeg, the artist responsible for this skein scheme, who supervised 50 volunteer crafters from five continents, once covered an entire bus with her ambitious knitwear.

Dressing trees in giant sweaters is yet another fashionable branch of “yarn bombing.” Examples of this wooden wardrobe phenomenon include the “Hug Me” tree of Hampden, Maryland, and the “Knit Knot Tree” in Yellow Spring, Ohio. (The sweaters generally stop short of reaching the ground, in order to avoid the unsightly staining power of pooch pee.)

It all seems very sweet and cheerful, but will acceptance of “yarn bombing” starts us down a slippery slope of cuteness resulting in the dainty defacement of National Monuments and classic Roadside attractions? Will the Statue of Liberty soon sport a patchwork poncho? Will the Lincoln Memorial eventually wear a giant wool tam o’shanter? We think it’s only a matter of time before someone tops Toilet Rock with a crocheted tissue box cozy! [Post by Anne D. Bernstein]

Sections: Trends Comments Off on A Knitting Tribute