We’ll Cross That Bridge When We… Oh Wait. Never Mind. 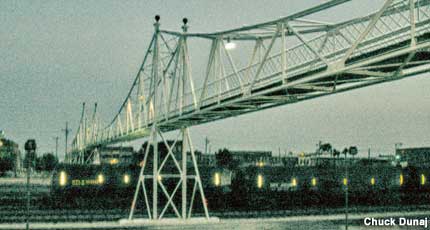 Among the Seven Deadly Sins of roadside attractions, Procrastination is perhaps the worst. It keeps the outsider artist from propping up his sagging sculpture barn, and the mom-and-pop museum from moving the oily rags away from the furnace. Gravity, fire, and age take over, and another roadside wonder goes to attraction Valhalla.

The guillotine blade of deferred maintenance is currently hanging over the World’s Longest Trainspotting Footbridge in Springfield, Missouri. It’s stood for 114 years, and has been recognized as an attraction by the city for so long that it even built the bridge its own parking lot.

But Springfield apparently never bothered to maintain the bridge itself. In March 2016 it was abruptly closed, and now the city faces a number of unfortunate choices. The cheapest, according to the Springfield News-Leader, is to simply tear the bridge down, which will cost over $400,000. If Springfield wants to repair the bridge or build a new one so that people can actually spot trains from it again, the cost will run as high as $17 million.

It could have been avoided by paying a city worker with a wrench and a bucket of paint to tighten the bolts and keep off the rust every couple of years — remember, this bridge has been standing since 1902. But it’s apparently too late for that now.

Directions:
I-44 exit 80A. Drive south, cross Route 66 and the train tracks, then turn right) onto E. Commercial St. Drive about a mile and you'll see the Jefferson Avenue Footbridge entrance and parking lot on the right.
Hours:
July 2017: Still closed.
Status:
Closed

2 Responses to “We’ll Cross That Bridge When We… Oh Wait. Never Mind.”