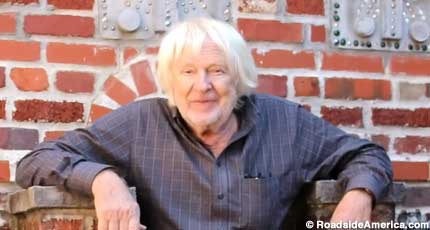 A display inside Junior Banks’ Fortress of Faith showcases his castle’s many appearances in the local press, along with Junior’s correspondence with authorities on his theories of gravity, bird migration, and the extinction of the dinosaurs. We were surprised to see that he was also a write-in candidate for U.S. President in 2008 as “Castleman” Banks.

“Here’s something strange about that,” Junior told us. On the Thursday before the election, he received a call from a woman at the local election board in Maryville, who told him that “every vote you gonna get is gonna get throwed in the trash can” because he hadn’t properly registered as a candidate. “She was even mean to me,” Junior said.

Junior feels that the two incidents are related, since his castle may be the Messianic Temple foretold in the Bible. Disrespecting Junior means disrespecting the castle: the voting district of God. “He just said, ‘Hey, my votes’ gonna get throwed away? Let me show you a little something.'”

Junior did not become U.S. President. He admits now that this was probably for the best, since it’s given him more time to work on the castle. 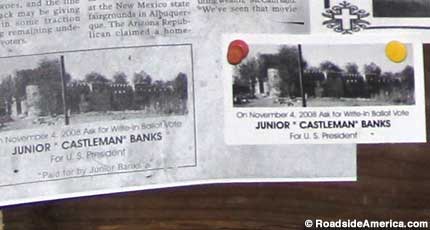 Sections: Attraction News Comments Off on Junior Banks for President

Lee Shirley Rd, Greenback, TN
Directions:
US Hwy 411 either one mile south of the stoplight for Hwy 95, or 3.5 miles north of the bridge across the Little Tennessee River. Turn east onto Trigonia Rd (no stoplight). Drive three-quarters of a mile. Turn left onto Lee Shirley Rd. Drive a quarter-mile. As you crest a hill, turn right onto a little driveway-size gravel road. The castle is at the road's end.
Hours:
Junior is often there 8:30-11:30, 3-dusk. Closed when he's not around. Local health policies may affect hours and access.
Admission:
Free, but bring some cash for the donation box.
RA Rates:
Major Fun