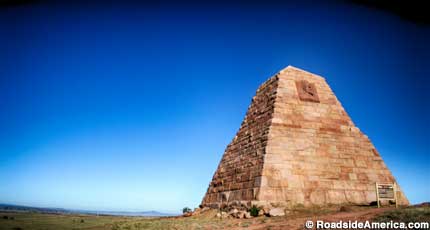 The U.S. Secretary of the Interior, and the National Park Service Director, have jointly announced that the Ames Brothers Pyramid has been designated a National Historic Landmark. It was one of ten new inductees, which a press release described as, “historic properties of exceptional value to the nation.”

Judging the value of the Landmark list is difficult, but we assume it means that the Pyramid — which sits out in the sagebrush of Wyoming — will be funneled some government money for upkeep, and probably makes it more difficult for a rancher to tear it down.

There are far fewer National Historic Landmarks than sights on the National Register of Historic Places. The Ames Brothers Pyramid joins an exclusive club of Roadside-worthy destinations also deemed Landmark-worthy, including Lucy the Elephant, the X-10 Nuclear Reactor, and Graceland.

We skimmed through the National Historic Landmark list and found a surprising number of tourist attraction submarines, but no other pyramids.

211-205 Monument Road, Buford, WY
Directions:
I-80 exit 329. The top of it is visible to the south when driving west, a mile or so before the exit. Turn south onto Vedauwoo Rd, then left onto Monument Rd. Follow two miles to the access road, which is to the east of the pyramid.
Hours:
Daylight hours. Climbing is strictly prohibited. (Call to verify) Local health policies may affect hours and access.
Phone:
307-777-6323
Admission:
Free
RA Rates:
Major Fun