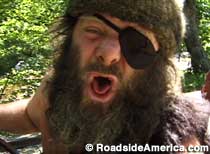 Those are just a few of the perks awaiting a qualified candidate who lands the job as Wolfman at Clark’s Trading Post, Lincoln, NH. The attraction’s veteran mangy barbarian, Bill Farrand, has terrorized the steam train at Clark’s for 15 years, and is retiring. The role calls for a natural ability to rant and make threats, yet still be a lovable rascal.

We put together a short video showing visits with two different Wolf men — Bill in 2001, and an earlier Wolfman (Frank Aurelio) in 1991. 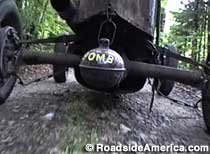 The Wolfman vehicle has evolved over the years; Bill’s features a mechanical jaw on the front that eats “flatlanders.” The “bomb” that dangled off the back may have disappeared during the Bush years.

One thing we recall about the job is that the Wolfman pretty much has free run of acres of lush forest trails on the Clark’s property. He squats in a couple of camps, an old shack, and a cave-like area with a big stew kettle. Before you laugh off a Wolfman career, look at your own job — who is really happier?