• Apache Leap Doom: A cliff named Apache Leap in Superior, Arizona, may be doomed by a next-door copper mine and a bad economy. According to legend, Apache warriors once leapt to their deaths from the Leap rather than surrender to the White Man — but the Wall Street Journal reports that local Indians, who once protected the Leap, now would rather have the mine. “The Leap is beautiful, but we need jobs.” Maybe if the Leap had yielded a happier Native American ending, it would have been turned into a tourist attraction and protected? 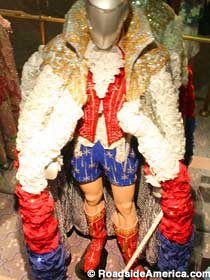 • Libbo Museum’s 30th: A happy 30th birthday to the Liberace Museum in Las Vegas, Nevada. The museum has lasted almost as long as the jokes that Liberace used in his stage act (and that his audiences  loved), which is impressive because Liberace has been dead for 22 years. “How do we sort of rebrand and refreshen his image?” asks a museum board member in an article in the Las Vegas Journal-Review. “That’s a difficult thing to do, to try and get attention over someone who is no longer alive.”

• Diagnosing Dead Abe: A consultant for the TV show House claims that Abraham Lincoln had a rare genetic cancer syndrome named multiple endocrine neoplasia type 2B. So what? Well, the Grand Army of the Republic Museum in Philadelphia, Pennsylvania, has the blood-spattered pillowcase from Lincoln’s death bed, and now the consultant wants a piece of it for DNA testing! The pillowcase’s fate will be decided at a May 5th museum board meeting — but if anyone asked us, we’d say no. First House gets Philadelphia’s pillowcase, then the next thing you know Jockeys will want Philly’s head of Old Baldy.

• Rocky Marciano Statue: The city of Brockton, Massachusetts, will have to wait a little longer to unveil a giant bronze statue of home-town hero Rocky Marciano, a famous boxer. Brockton had originally wanted to dedicate the towering 24-foot-tall pugilist on September 1st, his birthday. Now, however, according to the Brockton Enterprise, the dedication has been cancelled and construction has stopped because of “financial difficulties and an e-mail campaign of threats and harassment that apparently emanates from Chicago.” Nevertheless, confidence remains high among the statue’s supporters.