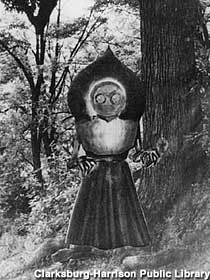 A flying saucer landed on a hilltop near the small town of Flatwoods, West Virginia, one late summer evening in September 1952.

A group of neighbors went to find it and were confronted by an alien creature, at least ten feet tall, dressed in a skirt. It had a green body and bulging eyes set in a glowing red face that was shaped like an Ace of Spades. The creature let out a series of shrill hisses and loud thumps and started to glide -- not walk -- toward the witnesses, who fled in terror. They were also violently ill, victims of some sort of poison gas emitted by the creature.

Subsequent visitors found no trace of the saucer or the monster, but they did notice a "sickening, burnt, metallic odor" that could not be explained.

Special Powers:
Levitates, is horrifying to look at, and can eject a noxious mist that makes people and dogs sick.