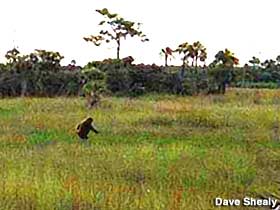 The hollerin' refrain to the "Ballad of the Skunk Ape" (available on a CD/DVD at Skunk Ape Research Headquarters) equates this Florida monster to the more famous Sasquatch. Those in the know, however, believe that the Skunk Ape is more gorillalike and less humanlike than its Pacific Northwest cousin.

The Skunk Ape is described as around 400 pounds and over six feet tall. A small community of Skunk Apes inhabits the Everglades, according to some believers. The creature's most distinguishing characteristic -- other than the fact that it is a creature -- is its stench, which is attributed to swamp gas clinging to its abundant hair, coupled with a lack of soap. The smell has been compared to a trash dumpster on a hot day, and is useful in distinguishing the monster from a redneck in a monkey suit.

Special Powers:
It smells real bad. The Skunk Ape may also have a taste for human flesh, as people do disappear in the South Florida swamps from time to time.

What's Out There for Vacation Travelers?
A Skunk Ape statue out by US 41 marks the entrance to Skunk Ape Research Headquarters.