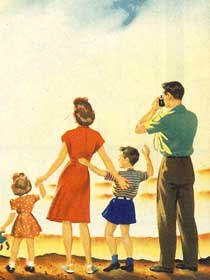 With the new year comes the promise of new wonders, yet unborn, that will dazzle our eyeballs into the distracted-driver danger zone. Here’s a brief look at some of the anticipated highlights for 2010 — and remember that every year also brings dozens of unexpected new attractions. Despite a down economy, we’ve found no lack of new places to explore.

Several long-delayed museums are scheduled to open, including the Cold War Museum in Virginia, the Advertising Icon Museum in Missouri, the Lost World Museum in New York, and the Museum of Clean in Idaho. The Cold War Museum will be run by Francis Gary Powers Jr., son of the infamous U-2 spy plane pilot; the state-of-the-art Icon Museum will be devoted to only the most iconic sales-creatures in history; and the Lost World Museum plans to exhibit animal freaks in its attempt to disprove evolution. The Museum of Clean has had its grand vision stalled for several years, but an untidy nation needs it more than ever.

Other scheduled openings in 2010 include a Goonies Museum in Oregon and a Titanic Museum in Tennessee, housed in a half-size replica of the doomed ocean liner that’s reportedly even better than the one already in Branson, Missouri. Another too-big-to-fail attraction is the Presidential Park at Waterlights in Texas, a combination of giant President heads and Venice-style canals whose grand opening has been deep-sixed for months by a waterlogged real estate market.

2010 will also see the promised groundbreaking for the Michael Jackson Museum and replica Neverland Ranch in downtown Gary, Indiana. The mind spins like a CD at the potential of this attraction, and although it will probably take years to build, it will give the youth of the 1980s something to look forward to in their dotage.

New statues scheduled for unveiling in 2010 include bronze tributes to American heroes such as Dick Tracy in Illinois, Chuck Berry in Missouri, Frank Zappa in Maryland, and boxer Rocky Marciano in Massachusetts — that one’s a whopping 24 feet tall. A 30-foot-long prehistoric sea monster is scheduled to be unveiled in Nebraska only ten days into the new year.

Rumors are circulating that the recently closed Cypress Gardens may reopen in 2010, and we’ve read reports that all of the mementoes from the just-shuttered Roy Rogers Museum may find a new home as well. We always hope for the best, but we’re also still waiting for the closed Star Trek: The Experience to reopen in Las Vegas, and that was promised for May 2009.

Sections: Places, Trends Comments Off on 2010: A Year To Remember