A Uniter, Not A Divider 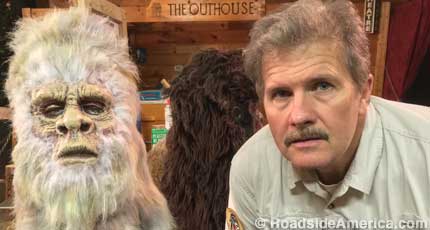 In a time when Americans yearn for someone to bring them together, David Bakara knows who that someone is.

David and his wife opened the Expedition: Bigfoot! attraction in Georgia last year. He told us that becoming a Bigfoot researcher was his first step into a larger world of… well, other Bigfoot researchers. He also said that people interested in Bigfoot put aside the petty problems that typically divide us.

“For people who don’t believe I say, ‘I respect you,'” David told us, words notably absent from today’s impassioned rhetoric.

Could Bigfoot-as-public-servant heal the wounds of a divided nation? He clearly meets at least some of the criteria for office: Bigfoot is American-born and he’s certainly old enough. And the idea of a national leader as a crazy-haired inhuman creature no longer seems impossibly farfetched.

But Bigfoot doesn’t need to win an election to improve our lives. According to David, he’s already won our hearts.

“I went looking for Bigfoot, and instead I found myself,” David told us, describing his fellow Bigfoot believers as “neat friends” who are “down-to-earth” and who “drop all the complications.”

That sounds like the kind of Americans our forefathers hoped for when they kicked out the divide-and-conquer British.

“In the Bigfoot world, we all trust each other,” David said. “We find out we’re all decent people.”

Sections: Attraction News, Rants Comments Off on A Uniter, Not A Divider