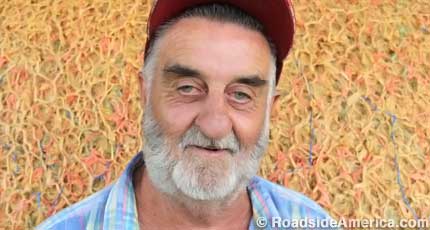 JFK – that’s James Frank Kotera, not John F. Kennedy – turned 70 on Groundhog Day, 2017. JFK is the creator and solitary roller of what may be the World’s Largest Ball of Twine. He’s been wrapping it for almost 38 years.

We called to wish JFK a happy birthday, and to ask how the twine ball was coming along. He said that he still adds to it every day, but not yet on his birthday because it was 12 degrees below zero outside (He and his outdoor twine ball are in northern Wisconsin). JFK asked if we were stopping by (he enjoys visitors), and we said we’d probably wait until it was a little warmer.

JFK told us that his twine ball currently weighs 22,425 pounds. We then checked with Linda Clover, caretaker of the “World’s Largest Ball of Twine” in Cawker City, Kansas, and learned that its current weight is 20,230 pounds. Both weights are best guesses since neither ball sits on a scale, but clearly this is a Golden Age of Giant Twine Balls with two active ten-ton behemoths vying for size supremacy.

JFK said that he had to run to get to his job at the town dump, but planned to add to his twine ball later in the afternoon. “When it warms up,” he said. “It keeps me young.” 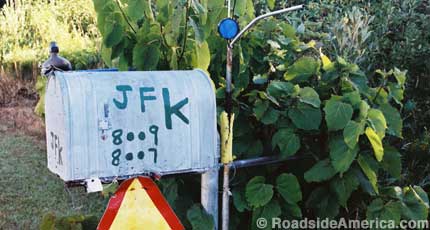 8009 S. Oakdale Rd, Lake Nebagamon, WI
Directions:
From Superior: Take US 53 south about four miles after it splits with US 2. Turn left on Hwy B. East on Hwy B three miles, then turn right on Hwy P (Ash St.). South almost two miles, then turn left on E. Minnesuing Rd. The first right will be S. Oakdale Rd. The ball is in an open-sided shed, on the southwest corner.
Hours:
Visitors welcome, but you have to sign the journal in the Twine Ball mailbox. Local health policies may affect hours and access.
Admission:
Free
RA Rates:
The Best