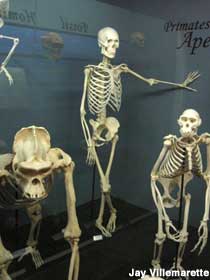 It takes a long time to create a museum of skeletons — especially when you have to strip off all the meat and reassemble the bones yourself. That’s a big reason why the Museum of Osteology, which began construction in Oklahoma City in 2004, is just opening now.

Osteology is the study of bones. The museum is the project of Jay Villemarette, founder of Skulls Unlimited, the world’s biggest supplier of bones to museums and medical colleges (and to you, too, if you want some). The business is right next door to the museum, which means that the museum will never lack raw material for its exhibits. Despite the entrepreneurial connection, Jay says that nothing in the museum will be for sale. “That kinda defeats the purpose of a museum,” he told us. “But if you want a skeleton like one in the museum, we’ll put one together for you.” 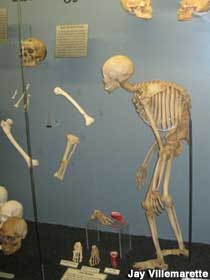 Jay’s business uses flesh-eating beetles to strip the meat from carcasses and corpses. He’s set up a terrarium at the museum entrance, filled with the beetles and a yummy skull, to show how its done — although he told us that he may replace it with a webcam of the beetles in action next door (Safety laws forbid tourists from visiting in person). “The beetles smell really bad,” he said.

The museum has over 400 skulls and 200 skeletons currently on display. That includes human skeletons, which a man with Jay’s credentials doesn’t find too difficult to obtain. Other boney highlights include a 40-foot-long humpback whale, a Komodo Dragon that was a gift to President Bush from Indonesia, and an unsurpassed collection of five two-headed calves.

More on Museum of Osteology