Circus Memories in a Giant’s Boot

For over 40 years, a rotting rubber boot was the unofficial civic symbol of Gibsonton, Florida. Gibsonton was a winter retreat and retirement town for carnival people, and the boot had belonged to Al Tomanini, an eight-foot-four-inch giant and sideshow sensation. When he died in 1962, his wife Jeanie (the two-foot-six-inch “Half-Girl”) placed one of his giant boots on a cinder block pedestal next to US 41 as a memorial. 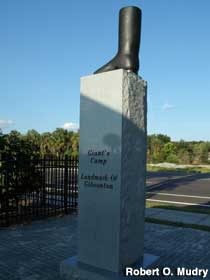 Sun and humidity gradually took their toll. Carol Philips, chairperson of the Concerned Citizens of Gibsonton, told us that in September 2007 she was attending a county seminar when a man came up to her and said, “Listen, you people in Gibsonton really need to do something about that boot. It looks terrible.”

Carol drove to the boot and took careful measurements and photographs, thinking that she might be able to find a twin. “And a couple of weeks later, it wasn’t there any more. It had completely vanished.” Then a couple of weeks after that, the cinderblock pedestal was destroyed in a traffic accident.

With a clean slate, the Concerned Citizens of Gibsonton scrapped the replacement idea and set out to build a new, improved boot memorial. They had to circumvent some bureaucratic obstacles, but the monument was finally unveiled on October 2, 2010. It stands at nearly the same spot as the original boot and is much more majestic: a towering granite pillar, exactly the same height as Al Tomanini, topped by footwear of identical dimensions to the old boot, but made of a newer, near-indestructible composite, according to Carol. The boot may have its foes over the coming years — lighting strikes, hurricanes — but it should not rot.

Sections: Attraction News, Statues Comments Off on Circus Memories in a Giant’s Boot

US Hwy 41 S., Gibsonton, FL
Directions:
On the southbound (west) side of US 41 just south of the bridge over the Alafia River. I-75 exit 250, drive west on Gibsonton Drive for 2.5 miles, then turn right onto US 41 and drive north for one-half-mile.