Appearances of invincibility, even in a roadside statue of an all-powerful being, can be deceiving. The world was shocked earlier this year when a perfectly healthy “Touchdown Jesus” was struck by lightning and incinerated in Monroe, Ohio. A second coming of TD-J may be in the cards, but in the meantime another savior statue has risen, along I-35 north of Owatonna, Minnesota. 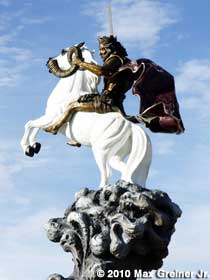 Jesus has come back from heaven — to raise hell.

The statue stands 18 feet tall outside of a megachurch that was formerly an aviation museum. In fact, Jesus’s current spot was previously occupied by a sculpture of three backflipping fighter jets.

The Coming King was created by Max Greiner Jr., the same artist responsible for the towering “Empty Cross” erected earlier this year — next to yet another freeway — in Texas. He writes, on his web site, that while sculpting the statue his own body, clothes, and bathroom became covered with “Glory Dust,” a miraculous substance that he notes is also mentioned in the Bible.

2300 Heritage Place NW, Owatonna, MN
Directions:
North of Owatonna. Along the southbound Frontage Rd between I-35 exits 43 and 45. Just south of Cabela's, on the south side of the Christian Family Church megachurch.
RA Rates:
Worth a Detour

More on Warrior King Jesus on a White Stallion