People who keep their valuables in a coal house shouldn’t be surprised if they burn up. 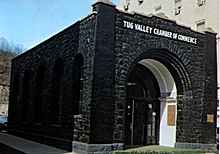 Local news reports suggest that the House itself, made of 65 tons of coal, escaped critical damage. Its interior, however, was gutted; a significant loss. The House was used by Mingo County as its museum, and the fire destroyed artifacts relating to the Hatfields and McCoys, and perhaps other colorful West Virginia treasures as well. It was a coal house, Mingo County….

The upside to the story is that West Virginia has plenty of building material on hand to patch up The Coal House, which Williamson’s civic leaders have vowed to reopen as quickly as possible. And if the fiery fate of The Coal House makes people at the Straw House or Paper House more careful, well, that’s okay, too.

House Made of Coal

More on House Made of Coal