Andy Griffith and his Siamese Twin townmates finally have a permanent roof over their heads. 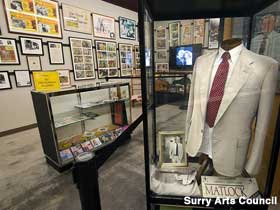 Mount Airy, North Carolina, was the boyhood home of Griffith and a model for the TV town of Mayberry. Chang and Eng, the world’s first “Siamese Twins,” also lived in Mount Airy (and are buried nearby). For years, artifacts of Chang and Eng were displayed in one of the town’s historic homes. Then a collection of Andy’s artifacts were added to the exhibit, and eventually took over most of the house. “The collection was given a room,” recalled Tanya Jones, Executive Director of the local arts council (and a descendant of Chang and Eng). “Then it took over another room, and another room, and another room….”

With interest in Andy rising and display space running out, part of the collection was shifted to a downtown shopping mall. These mementos belonged to Emmett Forrest, a life-long chum of Andy’s, and included the suit that Andy wore for nine years on Matlock, and a plastic casing from an Andy Griffith Whole Hog Sausage. 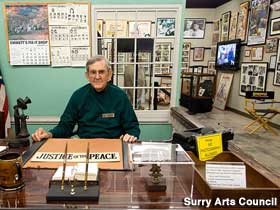 When the historic home closed, Mount Airy was left with only a part of its Mayberry heritage on display — and with the year 2010 looming (the 50th anniversary of the show), that was a big problem. So funds were raised, bureaucratic obstacles were overcome, even Andy pitched in to help, and a new, stand-alone Andy Griffith Museum has now opened in town.

The museum includes everything from the previous two collections — or everything that fits, which is far from everything, but which also ensures that there will always be something new to see. A TV Land sculpture of Andy and Opie — identical to one in Raleigh, North Carolina — stands outside. And next door is the Andy Griffith Playhouse, and on its lower level is the Chang and Eng artifact exhibit. “If the Playhouse isn’t open,” said Tanya. “Just ask in the museum. They have the key.”

218 Rockford St., Mount Airy, NC
Directions:
I-77 exit 100 to Hwy 89/Pine St. east into town. At Moody's Funeral Home, turn right at the traffic light onto Graves St. At the top of the hill, turn right onto Rockford St. The museum is part of the Surry Arts Council complex. Look for the brick buildings on the right.
Hours:
M-Sa 9-5, Su 1-5 (Call to verify) Local health policies may affect hours and access.
Phone:
336-786-7998
Admission:
Adults $8.
RA Rates:
Worth a Detour