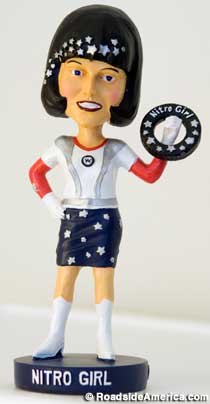 It’s a gew-gaw that would look sassy on the dashboard of any Roadside fan: a Nitro Girl bobblehead, patterned after a star-spangled tire-clutching titan siren who stands outside a tire store in Blackwood, New Jersey.

Ed Werbany Jr. owns the store, converted its classic Uniroyal Gal (purchased by his dad in 1965) into Nitro Girl, and then turned her into a nodding doll with an oversized head. You can purchase your own for $25 at Werbany Tire Town.

“I had her repainted in 2007, during the war effort, when everybody loved America,” Ed Jr. said of the Nitro Girl statue. “The last President loved America! This present administration is down on America.” Ed Jr.’s recollection seems incomplete, as he told us in 2007 that he’d created Nitro Girl because of America’s increasingly powerful women and the popularity of superhero movies. But ultimately no reason is needed to create a landmark such as Nitro Girl.

Ed Jr. confirmed that the “nitro” in Nitro Girl refers to Werbany Tire Town’s habit of inflating all of its tires with nitrogen, not air. That sounded slightly dangerous to us, but Ed Jr. assured us that it was safe, and added that Nitro Girl would never endorse anything that wasn’t patriotic. “You get about 3 percent increase in fuel economy using nitrogen instead of air in your tires,” he said. “It saves fuel, which saves America. We won’t be energy dependent any more.”

Did Ed hire the same local artists to design the bobblehead as had created Nitro Girl? “No, it was made in China,” said Ed Jr. Wasn’t that somewhat at odds with the patriotism championed by Nitro Girl? “Yeah, well, what are you gonna do,” said Ed Jr.

Sales of the Nitro Girl bobblehead were especially brisk around the holidays, according to Ed Jr. “A lot of people sent them to friends who have left the area, so that they remember what home is like.”