Cypress Gardens To Be Legoland Florida 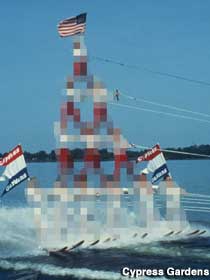 The news fell on Florida like a ton of tiny plastic bricks. Cypress Gardens, known for its water ski shows and Southern Belles, will be turned into Legoland Florida in 2011.

The venerable Florida attraction struggled to survive after a series of recent resuscitations, and shut down for good in September 2009. It’s now been bought by an English company that runs the Legoland park chain, one in California and three in Europe.

Cypress Gardens’ new owner was mum on the fate of the Southern Belles, but promised to keep the water ski shows “with a Lego twist.” He did not elaborate, but we’re certainly intrigued. Water skiing on a lake of Legos? We’d pay to see that!

The new Legoland will reportedly be the largest ever built, with the same central “Miniland” as in all the other parks, populated with sculptures of landmarks from the surrounding region. Let’s guess: astronauts, alligators, Clown Rushmore (probably not, but it is nearby) — and maybe this is the place where the Southern Belles will be retained as well: as life-size, slightly-squared-off Lego sculptures.

3 Responses to “Cypress Gardens To Be Legoland Florida”