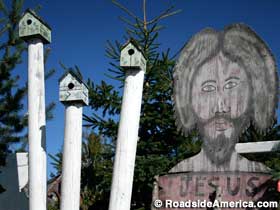 Jerry Cardone led an uneventful life.  Then he died, went through a tunnel of light, and met God — and that’s went the trouble started.

Jerry Cardone is the yard artist who’s building the 7 Wonders of God Creatures along a roadside in Maine, only a couple of miles from the Canadian border.  “I started this late in life,” he told us.  “I didn’t want to be no damn artist.”

Jerry’s entry into the art field followed his brief encounter with the afterlife.  “I seen hell there,” he said.  “I was ready to jump in the trap door and take my medicine.  I figured my father’s down there, playing cards with Hitler, so what the hell.”

God, however, had other plans for Jerry, who remembers their dialogue clearly:

God: I don’t want you to jump in yet.

Jerry: What do you want me to do?

God: I want you to go back down and be an artist. 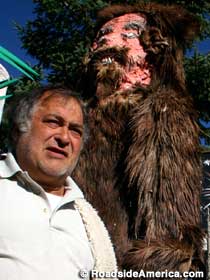 God: Well, you’re gonna be an artist whether you like it or not.

Jerry: I don’t want to be an artist.

God: Okay.  I’ll be the artist, and you just be the brush.

And with that, Jerry agreed to return to Earth and to do God’s will.

“I’m not doing it because I want to do it,” Jerry said.  “But I gotta do it.  I don’t know what He’s doing, but I know He can destroy the world any time he wants!”

Sections: Places Comments Off on God And Jerry Cardone: Art By Argument

Directions:
I-95 exit 304 (the last one in the U.S.) onto Airport Drive. Drive south, then take the first right onto US 2/Military St. Drive a little over one mile. The 7 Wonders will be on the right; park across the street on the left.
Hours:
Abandoned; artworks are gone.
Status:
Gone

More on 7 Wonders of God Creatures