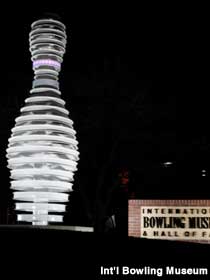 Has it really been since September 2008 that the International Bowling Museum and Hall of Fame closed its doors forever in St. Louis, Missouri?

How has the world survived 16 months without a Bowling Museum?

We spoke with Mark Miller of the U.S. Bowling Congress. He said that while the old museum skewed heavily toward history, the new one emphasizes “bowling as it is today and as it hopes to be in the future.” Still, it has plenty of exhibits that establish bowling’s rightful place in history, including a mummy holding a bowling ball (to convey the lengthy heritage of the sport) and an animatronic pin boy named Ronnie who complains about automated pin-setting equipment. 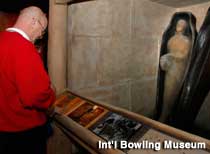 We asked Mark about the future of bowling, and he said that it’s happening right now at the training and equipment testing center, which is on the other side of the building from the Bowling Museum. This is where bowling’s scientists test secret new pins, gloves, lane oils, and anything else that can affect the score of a game. Unlike at some museums, however, visitors aren’t allowed to peek behind the scenes. “These products are given to us in confidence,” Mark said.

Can visitors at least peer in the windows?  Mark was sympathetic, but firm. “They’re tinted windows. You can’t look in.”

621 Six Flags Dr., Arlington, TX
Directions:
I-30 exit 30. Drive southwest on Six Flags Drive for one mile. You'll pass a roller coaster on the right, go through a stoplight, the museum will be on the right with a bowling pin sign out front.
Hours:
Tu-Sa 9:30 am - 5 pm (Call to verify) Local health policies may affect hours and access.
Phone:
817-385-8215
RA Rates:
Worth a Detour

More on International Bowling Museum and Hall of Fame