The idea that just because something leaves the planet, doesn’t mean that it leaves the jurisdiction of the state where it was manufactured, could lead to messy turf wars down the road. For example, does California’s declaration mean that we’ll have to give back all of the stuff left on earth by the space aliens? Among the more than 100 moon items designated by California include “bags of human waste,” and we suspect that California is staking claim only to the bags, not their contents. Probably the many jugs of pee that populate our roadsides are safe from territorial squabbles — for now. 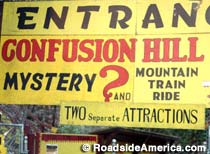 As for Confusion Hill, we think that the California Historical Resources Commission did credit to the bureaucracy. The Santa Rosa Press Democrat cites the Commission’s staff report, calling Confusion Hill a “notable” example of an attraction “created to lure Americans,” and also the only Mystery Spot in Mendocino County. Perhaps other states with Confusion Hill-like attractions will now follow California’s example and protect America’s valuable Mystery Spots. They have always been rare and fragile. And now they could become targets for angry space aliens, looking for a way to discombobulate gravity and float their junk back home.