On Groundhog Day, most eyes turn toward Phil the Groundhog in Punxsutawney, Pennsylvania. But it’s a big country, and Phil’s prediction may not apply to all parts of the U.S. Additional weather-forecasting critters have appeared in recent decades (some of them far less serious than Phil) to take up the slack. 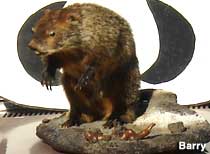 Unadilla Bill, for example, has forecast the end of winter on the first Saturday in February every year since 1988. That’s when Unadilla was officially declared the Groundhog Capital of Nebraska by then-governor Kay Orr (The framed proclamation is displayed in the town’s bank). Bill has been dead this entire time. He began his work only after being caught in the garden of Unadillan Bob Brandt, who then had Bill stuffed, proclaimed himself Head Groundhog, and petitioned the governor for the declaration.

Bill’s big day is now the focus of an enthusiastic annual parade, which swells Unadilla’s population from 300 to 500 according to Nathan Bischoff, a member of the Groundhog Central Committee. Bill makes a triumphant entrance, duct-taped to the hood of the official Groundhog Car. He’s then detached and placed in the middle of the street to see if his shadow appears. “Some years it’s brutal, it’s really cold,” said Nathan. “But Bill is brought out no matter what.” The prediction is followed by a cream chicken dinner and a Soup and Jerky contest. We asked Nathan if the jerky was groundhog jerky, and he said no, although, “I’m sure there’s a few of us around here who’ve eaten groundhog.” 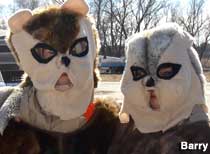 Bill is never far from his admirers. “He resides at The Bar during his off days, which are most days,” said Nathan, who explained that The Bar is the name of the town’s bar. This is where visitors can have their pictures taken with Bill, and purchase Bill postcards and souvenirs, including Bill’s official t-shirt, which changes annually. All profits go to the local rescue squad and fire department.

“He’s available year round,” said Nathan of Bill, now well into his third decade of postmortem prognostication. “We keep him dusted. He’s holding up pretty good.” [Thanks to Barry for the pix]

Sections: Attraction News Comments Off on Prairie Winter No Match For Unadilla Bill

359 Main St., Unadilla, NE
Directions:
Hwy 2/H Rd to Unadilla, then turn south onto town. The Bar (Home of Unadilla Bill) is between G and H Sts on Main St., which parallels the train tracks on the south edge of town.
Hours:
Tu-Sa 10-5 (Call to verify) Local health policies may affect hours and access.
Phone:
402-828-2800