[Note: in 2016 the museum moved to expanded facilities at another location in Portland.]

Loren Coleman’s International Cryptozoology Museum has opened in Portland, Maine, making that city a go-to destination for the global community of monster-lovers. 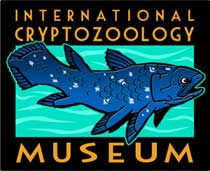 “This is the only Cryptozoology museum in the world, I’m absolutely positive of that,” said Loren, the museum’s founder and curator. (Cryptozoology is the study of unknown or mysterious animals, which include monsters.)

Loren said that other museums are devoted to specific creatures, such as Mothman and Bigfoot, and that there are other museums broadly devoted to strange things. No museum, however, has covered the freakish field of monsters and creatures in general, until this one.

The museum has been “squeezed with a shoehorn” into its current space, a room and hallway in a building that’s also occupied by a book store.

Loren learns the interests of each person who visits — artists, scientists, engineers, kids, or people who just like monsters — and then gives a personal tour of the museum tailored to those interests. That sounded like an exhausting approach to us. “I really didn’t know what I was getting myself into,” Loren admitted, after opening the museum in November 2009. “But I’ve got a lot of energy for someone who’s 62. I’m hanging in there.” 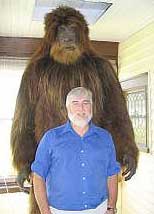 A thousand people have visited the museum in its first three months, an impressive accomplishment in Maine in the middle of winter. Loren said that only a handful have been skeptics, and that one of them paid him a backhanded compliment when he left, saying, “You’re not a nut.”

In addition to his own extensive collection, the museum has become the repository of donated artifacts from grateful visitors who are happy that a place now exists that will preserve and exhibit their treasures. According to Loren, a Hollywood model-maker has already given the museum an 11-foot-long replica of a sea monster that was found in the stomach of a sperm whale in 1937. Another man donated his 40-years-in-the-making collection of Jackalope post cards. “So once again I’m running out of room,” Loren said, although he plans to keep the museum in its current location at least until the end of 2012.

“I want to follow the Frank Lloyd Wright model and live to be 93,” he said with a laugh. “That way I can see the museum grow into a bigger space.”