« Derek Costello: Hard-Working Master of Wax | Main | The Do Nothing Machine » 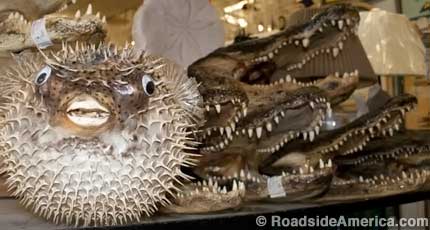 We were shocked when we first read of one of the new April 2014 “rule tweaks” by the Florida Fish and Wildlife Conservation Commission. As reported by the Naples Daily News:

Forbidding the sale of stuffed baby alligators that depict “an unnatural body or body part positioning.” That could mean human poses, including standing upright or waving.

So, a ban of a classic (albeit repulsive) Florida souvenir. No! Then we thought about it for a moment, and tried to recall — had we ever seen such a thing? 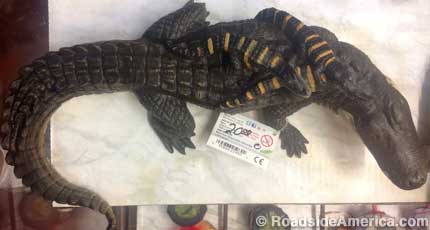 Clearly there is no shortage of baby gator body parts and no restrictions (other than the limits of imagination) when it comes to turning an image of a gator into something quasi-human.

But who would go to the trouble of stuffing an actual baby gator so that it was waving or doing anything else unnatural to an alligator?

After a search of our trip archives, we uncovered one photo from 2003, in the “Mermaid Store” in Orlando. It’s of a large adult alligator, not a baby, standing upright with its head sawed off and reattached at the neck to look forward, like a human. 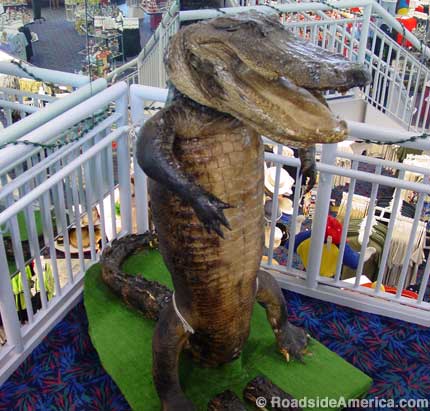 And it’s not hard to imagine that it might be seasonally outfitted with a Santa’s cap or Easter Bunny ears. With no visible price tag, it seemed more intended to accent the tacky atmosphere rather than to be sold as a piece of merchandise. And it may be long gone.

Are Florida bureaucrats proactively heading off an imagined future market of baby gators slaughtered to make souvenir water-skiers and thong-frollicking reptiles? Or are gator-humanoids already doing a brisk business in countless souvenir stores?

Let us know if you’ve seen any examples!