The Do Nothing Machine 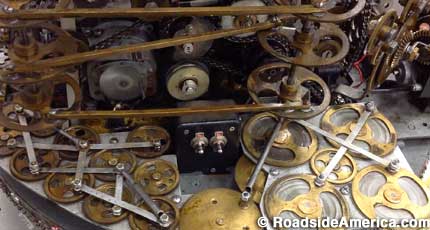 The most oddball exhibit at the Miniature Engineering Craftsmanship Museum, Carlsbad, California, is its Do Nothing Machine, a gear-punk marvel of inventor obsession. If you take the tour of the museum’s workshop, you’ll probably get to see it run… if it’s not broken.

Designed and built starting in the late 1940s over the course of seven years, Lawrence Wahlstrom of Los Angeles built an insanely complex contraption. It contains 764 gears and elements. Though it has been labeled at times as a “Flying Saucer Detector,” its complete lack of purpose has made the other name stick. 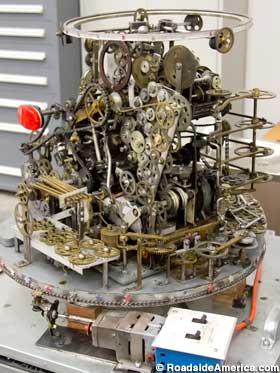 Tour guide and master machinist Dave Belt extols the virtues of this one-of-kind gizmo. It’s driven by three motors, one extracted from an old slot machine.

The center of the Do Nothing Machine, hidden behind layers of belts and gears is part of a World War II Norden Bombsight.

It’s not exactly miniature in the sense of the other machines at the museum, but it is a marvel of excruciatingly elaborate mechanics. A posted fact sheet informs: “The three electrically powered motive forces are gravitationally free, non-syncronal, trapezoidal seclusion wound and in the Delta configuration.”

In case you were wondering.

Dave shows us a round gear driving a square gear driving an oval gear. Then he uses his always handy yellow pencil acts as a pathway for our eyes to arrive at the wonders within the Do Nothing Machine. “There’s a sprocket, with no axle, that stays in the same place.”

Someone has to keep the Do Nothing Machine running, and that duty seems to fall on Dave. In the course of a year, “it’s broken down about a dozen times,” he told us. He’s managed to coax it back to 100% pointlessness each time, to the delight of museum visitors. 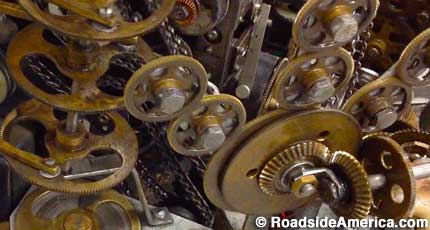 3190 Lionshead Ave., Carlsbad, CA
Directions:
Southeast of town. From I-5 take the exit for S21/Palomar Airport Rd. Drive east five miles. At the stoplight turn left onto S. Melrose Drive. At the next stoplight turn right onto Lionshead Ave. Drive a quarter-mile. You'll see the building on the left, #3190.
Hours:
Tu-Sa 9 to 4. Demos 10, 12, 2. (Call to verify) Local health policies may affect hours and access.
Phone:
760-727-9492
RA Rates:
Worth a Detour

3 Responses to “The Do Nothing Machine”