It’s hard to find an American tourist attraction more legendary than Aquarena Springs, San Marcos, Texas. For a time, it was second only to the Alamo as the Lone Star state’s most popular destination. Where else could you see a pig swim with mermaids, or Glurpo the Clown smoke underwater?

The family-owned theme park, sold in 1994 (its theme park elements closed by 1996), is still a vital memory for generations of Texans and out-of-state visitors. Very special for us, as well — it was one of Roadside America‘s “Seven Wonders” in our first book.

A new DVD documentary, “Aquarena Springs and Ralph the Swimming Pig,” provides a fun and sentimental portrait of this lost “Texas Treasure.”

Bob Phillips wrote/directed/edited the film, assembled from archival photos, home movies and videos, and interviews he conducted with key figures — former employees, managers and fans of Aquarena Springs, even some mermaids and Glurpos. Bob is the son of Gene Phillips, who was pivotal in managing Aquarena Springs in the 1970s and ’80s, when attendance approached 350,000 per year.

Like many popular roadside attractions, Aquarena Springs started as a family venture that grew over successive generations. In 1929, J.G. Rogers opened a hotel resort at the headwaters of the San Marcos River in San Marcos. By 1946, son Paul Rogers was introducing the first glass bottom boat into the springs.

The DVD is porkroll-stuffed with details about the evolution of the attraction, which eventually included a mock western village, a Swiss skyride, a gator show, and various performing animals. The centerpiece was the “World’s Only Submarine Theater,” a marvel of engineering that would blow ballast and submerge an audience below the water. After it was opened in 1950, the submarine theater garnered wide attention — years later, we found it featured on the cover of a 1952 Popular Mechanics magazine (which also appears in the film).

Aquarena always had some new stunt to attract media interest — in the early 1950s it hosted the first underwater wedding, reported in Life magazine (to prevent the wedding gown from floating up over the bride’s face, small lead balls were sewn into the hem),

The mermaids and their underwater maneuvers were part of a show repeated several times daily. Aqua-Miss Margaret Russell taught the mermaids some of the techniques she brought from water show stints in Florida. In the film, veteran aquamaids talk about the underwater picnic routine, avoiding the Spring’s scary big catfish, and explain how to drink from a Coca Cola bottle while immersed in liquid. 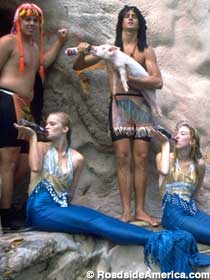 Aquarena’s greatest roadside triumph was the inclusion of a pig in every submarine theater performance. “Ralph” would run down the volcano ramp and execute a “swine dive” into the Springs, then swim, as the theater slowly submerged. The documentary provides all the details — the training and feeding, the special between-show retreat (“Ralph’s Pig Palace”).

Many of the interviews are shot at an on-site reunion, veteran employees wistfully recalling time spent in a magical place. At one point, a 1950s era Glurpo, Robert Cox, mentions his “smoking underwater” trick, then pauses and asks someone off-camera (probably Bob Phillips) “You want me to tell the secret?”

“Yea. Tell the secret!” And Robert does.

No spoilers here — you’ll have to buy the DVD.