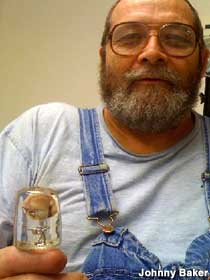 It hasn’t been easy for Johnny F. Baker, founder of Baker’s Junction Railroad Museum in Smithville, Indiana. By his own reckoning he has survived bone cancer and over 30 operations, lost his hip and leg bone and a few other parts, and had his right foot torn off and reattached.

Then last year he cut off his finger.

While working on repairs to the museum “I was using a circular saw over my head,” he recalled, “but I only have one leg and the knee gave out and I fell and the saw cut my finger off.”

Johnny grabbed a Coke he’d been drinking and dropped the finger in with the ice, but by the time he arrived at the nearest hospital the digit was too far gone to be saved.

So — Johnny put the finger in his pocket and decided he would mummify it as a keepsake. “It was surprisingly easy,” he said. He packed the finger in salt for a few weeks, then sealed it in clear acrylic and turned it into a key chain. It was never far from the hand it had once called home.

But Johnny has had other problems as well — and that’s what’s prompted him to do the unthinkable: sell his finger. Johnny needs $10,000 to put new roofs on the two railroad stations at his railroad museum. He said he’d had a solid offer on eBay, but  the auction had been cancelled on the final day as part of eBay’s new “no human body parts” policy. Now he wants to put the word out to railroad buffs: if you want to help save this museum, buy my finger. 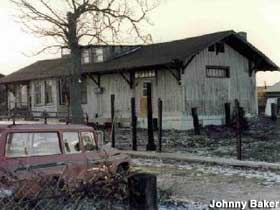 The finger, to be frank, is more a finger tip — but Johnny did a good job of preservation, with his fingernail still clearly visible. He said that he now keeps it in a locked glass case in the museum, which displays other “weird stuff” that he’s collected as well as railroad artifacts. When we asked him to describe something weird, he mentioned a naturally mummified possum that he’d found under one of the train stations that he subsequently shellacked to a board.

Johnny and his wife live in one of the box cars at the museum (they’ve converted it into an apartment) and welcome visitors year-round. Call first to make sure that Johnny’s not busy, and pay no attention to the angry signs out by the road. They’re directed at Johnny’s communist county planning and zoning commission, not museum buffs (and potential finger purchasers) like you.

Sections: Attraction News Comments Off on Needs Two Roofs, Will Sell One Finger

7898 Fairfax Rd, Smithville, IN
Directions:
Drive south from Bloomington on Hwy 37 then turn left (east) on Smithville Rd. Drive to Smithville, turn right onto Fairfax Rd, and drive about a mile south.
Phone:
812-824-2158
Admission:
Donation.
RA Rates:
Worth a Detour