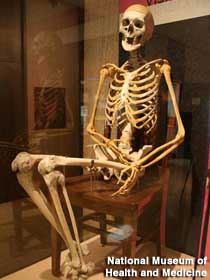 There’s only one collection in the world that showcases both a human hairball and the bullet that killed Abraham Lincoln — and it’s also an official American National Historic Landmark.

Welcome back, National Museum of Health and Medicine! The museum was closed for five months as its artifacts and things-in-jars were gingerly packed and moved from Washington, DC, to its new location in a brand new building in Silver Spring, Maryland.

Now about that human hairball….

“It’s one of our most frequently requested specimens,” said Tim Clarke, the museum’s deputy director of communications. “One of the first families that I showed around the museum last week asked for two things: the bullet that killed Abraham Lincoln, and the hairball. And I was glad to show it to them.” 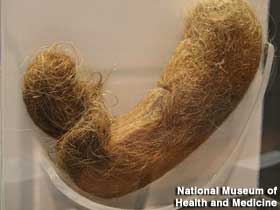 The hairball, medically known as a trichobezoar, was pulled from the stomach of a 12-year-old girl who had eaten her own hair for six years. According to Tim, its prominent place in the new museum is an example of how the staff will try to incorporate long-time visitor favorites — such as the hairball, death bullet, and the amputated leg bone of general Dan Sickles — with the museum’s mission of medical education.

Museum employees don’t necessarily assign a higher value to exhibits that prompt the most “Eeeews!” but visitor reactions are important and the staff does want to know what the public wants to see.

With a collection of 25 million objects, the museum can’t possibly display every anatomical nightmare in its cornucopia of curiosities, but a quick catalog of its opening exhibits includes a leg ballooned with elephantitis; a megacolon; the jet black lungs of a coal miner; dishes filled with cringe-inducing kidney and gallstones; and the skeleton of a Spanish-American War vet so arthritic that it fused into a sitting position for the last 15 years of his life (he died at 43). 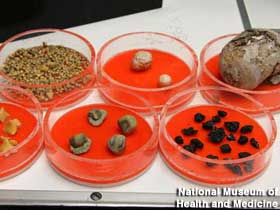 The museum, said Tim, constantly circulates exhibits, so although a favorite horror from the past might not be on display now, it could be again in the future. Don’t be shy about letting the staff know your preferences, and don’t feel nervous about visiting just because you want to look at things that are gross and cool.

National Museum of Health and Medicine

More on National Museum of Health and Medicine