« Meeting Every Dead President – or at Least, Standing on Them | Main | The World’s Most Mysterious Motorcycle »

During World War II, the Japanese really wanted to threaten the US mainland, thousands of miles from the fracas in Japan’s conquered territories. They sent a balloon bomb into Nebraska and dropped a bomb from a seaplane in Oregon, where another balloon bomb later in the war even managed to kill a few people. 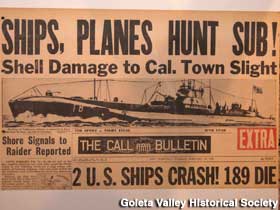 But Japan’s first foray into the lower 48 took place in the beach town of Ellwood (now Goleta), California, about a dozen miles west of Santa Barbara. At sunset on February 23, 1942, a large Japanese submarine surfaced off-shore and began lobbing shells at an oil refinery along the tidelands.

It was the first time since World War I (and before that, The War of 1812) that mainland America had been attacked by a foreign power.

Whoever was aiming the projectiles was awful. Most of the twentysomething shells fell harmlessly. One landed, unexploded, on an inland ranch; another blew the tin door off a pump house. After 20 minutes the sub gave up and sailed out to sea.

The incident was pretty much forgotten for 70 years, until the Goleta Valley Historical Society realized that the town had been part of history. It worked with Ken Hough, a researcher at the University of California at Santa Barbara, and gathered what artifacts it could find — including the pump house door and fragments of the unexploded shell — and has now put them on display at its History Education Center. 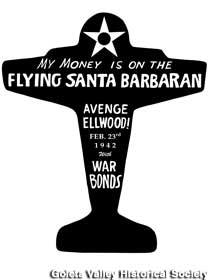 The “Avenge Ellwood!” exhibit is named for a war bond campaign that followed the attack. Its efforts proved as fruitless as those of the Japanese. A planned “Flying Santa Barbaran” bomber was apparently never built, and an “Ellwood Avenger” attack plane never attacked anything, ending its career, according to Hough, when it banged into another plane on a Florida runway.

The exhibit, which includes period clothing and uniforms, newspaper clippings, and other memorabilia, was unveiled along with a historical marker that now stands at the public beach nearest the spot where the submarine hurled its California hissy fit. The exhibit is currently scheduled to remain only until 2013 but, according to Hough, “there are probably many artifacts still to discover, likely in grandpa’s sock drawer or in a dusty corner of someone’s garage.”

Directions:
The exhibit is in the History Education Center at Rancho La Patera, owned by the Goleta Valley Historical Society. US Hwy 101 exit 107. Drive north on Los Carneros Rd for a half-mile, then turn right at the old train depot and drive to the parking lot.
Hours:
Exhibit ended/closed. (Call to verify)
Phone:
805-681-7216
Status:
Gone

3 Responses to “Avenge Ellwood! The Day The Japanese Attacked California”