Meeting Every Dead President – or at Least, Standing on Them

Kurt Alexander Deion is 17 years old — and he expects to visit his 38th (and final) U.S. President grave next month. Although we can’t say for sure, he may be the youngest person in history to accomplish this. He documents his travels on his web site, and has contributed a number of vital photos to our Roadside Presidents iPhone app. We caught up with him via e-mail. 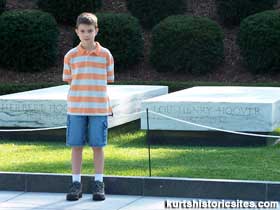 “Thirty-six presidents died before I was born,” Kurt wrote to us, offering a pragmatic reason for his hobby. “I never had the chance to meet them.” That’s a good point. America is now so old that no matter how long we may live, the Presidents in our lifetime will always be outnumbered by those who died before we could shake their hands or snap their photos. “Visiting their graves,” said Kurt, “is as close as I can ever get.”

Encouraged by understanding parents, Kurt began visiting President graves when he was eight. He’s tracked them down steadily ever since. “Usually it’s just me and my dad,” Kurt said of his travels, noting that his younger sister “doesn’t care for history or my hobby at all.”

We asked Kurt if high school is in general a difficult place to find kindred spirits. “With people my age, telling them I visit cemeteries right away is a great way to alienate them,” he answered. “A friend of mine from school might not find out for months.” 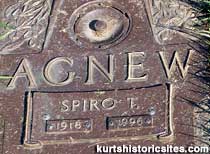 Their loss! Visiting President graves is an almost-always-admission-free form of travel. It takes you from coast to coast, California to Massachusetts, gets you out into fresh cemetery air (lots of greenery), and offers insights into the individual Presidents as people, from Calvin Coolidge’s gray headstone in Vermont to the stylish New York sarcophagus of Chester A. Arthur, America’s fancy-pants President.

Lincoln’s elaborate Illinois tomb is uncharacteristic of the down-to-earth man, but “we were going to give him a huge monument no matter what his wishes would have been,” noted Kurt. James Garfield has a Gothic mini-castle in Ohio complete with gargoyles. “I guess that was America’s way of telling Garfield, ‘Sorry you were assassinated.'”

Kurt is fascinated by the important aspects of history he encounters on every trip, and is always respectful when visiting the final resting places of the nation’s fallen leaders. 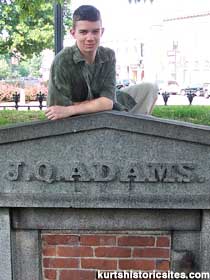 Kurt’s grave trek is not limited to Presidents alone, although they always come first on his itineraries. He’s also visited the graves of 33 Vice Presidents, as well as Supreme Court Justices, signers of the Declaration of Independence and U.S. Constitution, and collateral famous people buried nearby, such as Chris Farley and Al Capone. “Grave hunting is a hobby that just doesn’t end,” Kurt said. “There are so many possibilities.”

We asked Kurt to name the President who he’d most like to rise from the grave and accompany him to school. Kurt answered Lincoln. “He had a great sense of humor and would be fun to hang around with,” said Kurt. “Plus, everyone would recognize him. No one is going to be impressed if you bring Millard Fillmore to school for a day.”

One Response to “Meeting Every Dead President – or at Least, Standing on Them”