« Arm of the Unknown Soldier: A Friendly Wave | Main | Meeting Every Dead President – or at Least, Standing on Them »

Finally, A Museum With Glowing Fish And Sea Monkeys

Why has art professor Richard Pell opened a museum of plants and animals genetically altered by human beings? “If somebody else had done it first,” he said, “I wouldn’t have had to.” 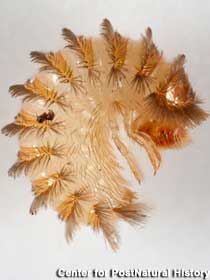 The Center for PostNatural History, in a former clothing boutique in Pittsburgh, Pennsylvania, showcases examples of human tinkering with the genetics of other living things, from the ho-hum (breeds of chicken) to the controversial (genetically modified crops). “It’s not a biology museum; it’s what people are doing with biology,” said Pell, whose interest in the subject goes back several years.

Pell has worked hard to make his museum objective, sowing “healthy confusion” among its visitors. He wants them, in his professorial way, to reach their own conclusions about the subject.

Some of the museum’s featured organisms include Sea Monkeys, which have been bred to survive dormant for years on store shelves; GloFish, the only transgenic organism you can buy in a pet shop; and an “extremely charismatic” beetle larva nicknamed “Ringo” whose diet consisted solely of genetically engineered mosquitoes.

Pell had to use his art skills to create a diorama for the still secret “BioSteel” goat, a U.S. military project whose milk contains a chemical used to strengthen body armor. Monsanto wouldn’t provide samples of its genetically modified corn, so Pell grew his own by planting kernels from animal food and seeing which plants survived the GMO pesticide. 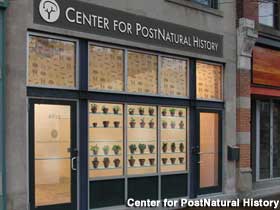 Pell was concerned that the Center for PostNatural History might be seen as an art installation masquerading as a museum, but those fears have failed to materialize. “No one’s asking if it’s true or not,” he said of his exhibits, grateful that his museum has been well received, particularly by the scientific community.

We  had hoped that the Center for PostNatural History might include exhibits on postcard-favorite animals such as the Jackalope and Fur-Bearing Trout. Pell, however, gently led us to understand that such creatures are natural hybrids, not human-engineered/PostNatural freaks, and therefore outside the scope of his museum.

Sections: Attraction News Comments Off on Finally, A Museum With Glowing Fish And Sea Monkeys

4913 Penn Ave., Pittsburgh, PA
Directions:
Northeast side of the city. On the north side of Penn Ave. between N. Millvale Ave. and Gross St.
Hours:
Su 12-4 or by appt. (email rich AT postnatural.org) Local health policies may affect hours and access.
Admission:
Free
RA Rates:
Worth a Detour

More on Center for PostNatural History