Accounts of the inexplicably in-sync insects — pulses of six seconds of darkness followed by three seconds of rapid simultaneous winking — were pooh-poohed by scientists until the mid-1990s. Now it’s such a popular attraction that the Park closes the access road to the site and runs trolleys so that people can get to it. 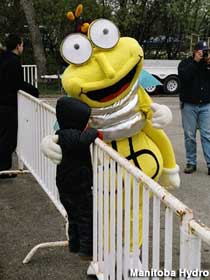 The equally mysterious Dismalites in Alabama have had nocturnal fans for centuries, but the fireflies of Elkmont certainly appear to have upped the ante for a nighttime bug show. Even Spook Lights don’t wink reliably, and unlike them the fireflies don’t have a reputation for chasing people or exploding. This makes the fireflies a much more family-friendly-freaky destination.

“Firefly Week,” with its many restrictions, is the first full week of June (June 5-13 for 2010). The Elkmont fireflies, however, don’t restrict their performances as narrowly, so you can probably just show up after dark the week before or after and still see a show.

Elkmont Rd, Elkmont, TN
Directions:
From Gatlinburg drive southwest on US Hwy 441 for two miles into Great Smoky Mountains National Park. Turn right at the Sugarlands Visitor Center onto Little River Rd. Drive five miles. Turn left onto Elkmont Rd and drive a mile to the campground. During "Firefly Week" every early June, Elkmont Rd is closed from 5 PM to midnight; you have to take a trolley from the Sugarlands Visitor Center.
Hours:
After dark; early June is peak time. Get parking pass in advance. (Call to verify) Local health policies may affect hours and access.
Phone:
865-436-1291
RA Rates:
Worth a Detour