Bronze JFK: Alive In Fort Worth 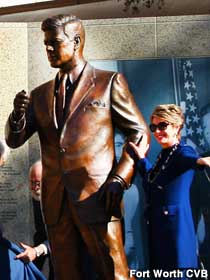 Those familiar with the John F. Kennedy assassination know that the President flew into Dallas, Texas, on Air Force One, then was picked up by a motorcade and promptly driven to his doom. But most people don’t know that he didn’t fly to Dallas from Washington or some other far-off spot. He flew from Fort Worth, only a half-hour drive from the assassination site. Kennedy could have taken a limo to Dallas and probably arrived as early, if not earlier, saving a whole lot of gas and perhaps even his life.

This close proximity between presidential life and death has fueled the rivalry between the neighboring cities of Fort Worth and Dallas. It grew a little hotter this week with the unveiling of the JFK Tribute, across the street from the Fort Worth hotel where JFK spent his last night on earth. The Tribute features an eight-foot-tall bronze statue of President Kennedy, which stands on almost the exact spot that the real Kennedy stood on the morning of November 22, 1963, when he gave an impromptu speech to a crowd gathered in the hotel parking lot.

“This isn’t about the tragedy of Dallas,” said Betsy Price, mayor of Fort Worth, at the statue dedication. “This is about his life.” 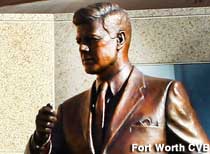 The JFK Tribute tacitly beckons passers-by to pose with the giant President, a much more inviting memorial than the freakish Kennedy Assassination Cenotaph in Dallas.  Still, it has quirks. The statue was sculpted by Lawrence Ludtke who died five years before it was unveiled (There were many delays). Conceptual drawings show JFK with his right hand extended, ready to shake hands with the crowd just as he did on that fateful morning. But the finished statue instead has its hand in a clenched, upright fist, as if JFK is holding an invisible little American flag, waving it at a passing parade on Main Street. Or maybe he’s just shaking his fist at Dallas.

The statue is backed by granite walls inset with eight-foot-tall photos of JFK on his last morning on earth: Kennedy speaking to the crowd, JFK standing with Jackie in her soon-to-be-infamous pink suit and pillbox hat, etc. And so no one misses these images, they are lit from behind at night, and the statue has its own set of after-dark spotlights.

901 Main St., Fort Worth, TX
Directions:
Downtown. On the southeast corner of E. 8th and Main Sts, just south of the Hilton Fort Worth hotel. Street parking is limited.
Admission:
Free
RA Rates:
Worth a Detour

One Response to “Bronze JFK: Alive In Fort Worth”