H. Ross Perot, the Texas billionaire businessman, was known during his two failed bids as a presidential candidate for dancing with his wife to the song Crazy by Patsy Cline. It was his way of acknowledging that people considered him a little nuts. 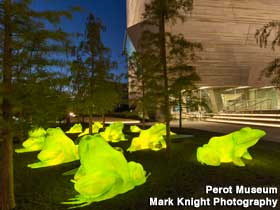 Now a new generation will associate the Perot name with a new kind of nuts… an over-the-top science museum that cost $185 million to build.

(Keep in mind, of course, that we love “over-the-top” and “nuts” in all their myriad forms and colors)

The Perot Museum of Nature and Science in Dallas, Texas was funded in part by a monstrously generous $50 million donation from Perot’s kids that resulted in the new facility being named after their parents. Ross and his wife cut the ribbon at the museum opening last week. 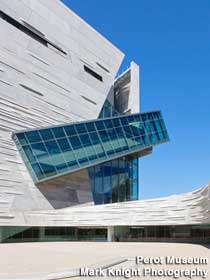 The intentionally off-kilter building is a 14-story-tall concrete cube broken by design clefts and strata. It was promoted by posters showing the building in the embrace of a Godzilla-size dinosaur. Outside is “Leap Frog Forest,” where huge amphibians glow an eerie green at night. Inside are 11 exhibition halls, musical stairs that play notes as you walk up and down, and a museum cafe operated by celeb chef Wolfgang Puck.

In the Bio Lab you can don a white coat and chop the head off a fruit fly larva. In the Sports Hall you can race for 55 feet against an athlete, a cheetah, or a Tyrannosaurus rex (Tip: pick the T-rex). In the Dynamic Earth Hall you can wobble on the “Earthquake Shake” floor during a mild tremor, or collapse like jelly when you choose the “extreme” setting. 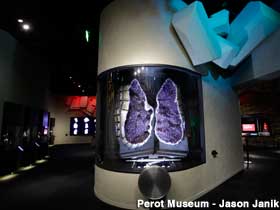 From what we’ve read about it, the silliest part of the museum is probably the Hunt Energy Hall, named for the sponsoring oil company. It gives brief nods to eco-trendy power sources such as the sun and wind, but its principal goal is to sell “fracking,” the injection of fluids to blow out subterranean natural gas.

To that end the Hall features a comically oversized drill bit boring its way along one wall, and the “Shale Voyager” 4-D ride. The ride shrinks you to the size of a peanut, drills you over a mile into the earth, then blows you out with a cool whoosh of gas. The safety and environmental regulations for frackers are conveyed in a song.

“You Be the Cocoa Bean” attraction experiences have come a long way.

Our top pick for wack, however, would have to be The Perot’s Being Human Hall. There you can have yourself bathed in powerful light so that everyone can see your veins, view sliced human cadavers mounted in glass, and attempt to launch a ping pong ball with your mind.

Perot Museum of Nature and Science

One Response to “Wacky Science Museum Named After Ross Perot”