“Too bad my cloning machine has been broken,” said Mark Cline. This was a year in which there were many times he’d have liked to be in two places at once. 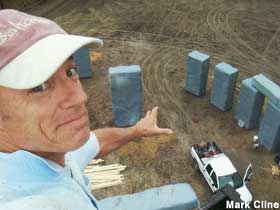 We spoke with Mark, creator of Foamhenge and countless oversized fiberglass roadside statues, just after he had flown in from Elberta, Alabama, where he’d been installing his two latest creations: Lady of the Lake, a giant half-submerged woman; and Bamahenge, the world’s first full-size fiberglass Stonehenge.

“I had to make Lady some new eyelashes since she lost some on the interstate,” said Mark. “Each is about two feet long. Maybelline would be proud.”

The two artworks wrap up what has been an eventful year for Mark. It began with his first ever honest-to-goodness art museum show; cratered with the malicious immolation of his Haunted Monster Museum; rode the fickle whims of celebrity with an on-again, off-again reality TV series; and somehow accommodated Mark’s usual output of dinosaurs, aliens, and giant ice cream cone men that always seem to be in demand. 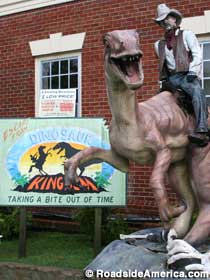 Mark said that the fate of two more of his attractions — Dinosaur Kingdom and Hunt Bigfoot with a Redneck, which both abutted the now-destroyed Monster Museum — are currently in limbo, pending the decision of the property owner. Scrap or rebuild?

“Once I’m gone, they aren’t gonna find another Mark Cline to come in and weave the magic like this one did,” said Mark, but he added that he would accept whatever the owner decides.

Also unclear is the fate of Foamhenge, part of the same property. Mark built it out of styrofoam in 2004, and the elements (and moron vandals) have taken their toll. It needs maintenance and restoration work, but will the property owner be willing to pay for it? Mark said that he would rather tear Foamhenge down than let it crumble into a ruin more ruinous than the original Stonehenge, but it’s apparent that the project is still close to his heart.

“Foamhenge was a question on Jeopardy last night,” said Mark. “I done gone and hit the big time!”

As for the immediate future, Mark has big plans — which could be dismissed as mere bragging if he didn’t have such a good track record of completing his previous big plans. These include one project that’s simply too large and too secret to mention, and another that we’re only allowed to describe as “anything goes.”

Lest you think that Mark is merely blowing smoke, two upcoming projects that he isn’t shy about describing are a 14-foot-tall robot in Virginia holding a crushed motorcycle “as the cyclist is running to escape,” and a 150-foot-tall Jesus in North Carolina built to be one foot shorter than the Statue of Liberty.

“Guys like me just don’t know what retirement means,” said Mark, “which means we either love to take on a challenge or are too dumb to know what we’re getting into.” If building Stonehenges and giant robots connotes an absence of intelligence, then we wish more people were as emptyheaded as Mark Cline.