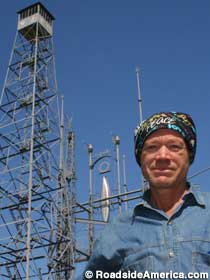 “I think most people have a conversation with themselves, but not in such an oddball way,” said Billy Tripp, creator of the Mindfield, a giant artwork in the little town of Brownsville, Tennessee. “Because my conversation is odd, it gets more attention than it deserves.”

Well, that — and the fact that it’s 130 feet tall and as big as a football field.

Billy views the Mindfield as something only relevant to himself, so he exerts little effort to make it understandable to others. We, however, thought that the artwork would be more enjoyable if people knew what they were looking at. But please don’t mistake us for artistic savants; we only know this stuff because Billy told it to us. 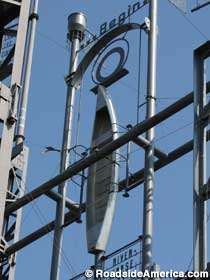 The canoe belonged to one of Billy’s favorite authors, William Least Heat-Moon, who used it as transportation for his book River-Horse: Across America by Boat. The circle above it represents the sun; the gray color symbolizes the afterlife. The large word “Begin” above it is the first and last word of Billy’s own book, The Mindfield Years, Vol. 1.

The happy girl silhouette represents Billy’s wife, Beth Shaw Tripp. The trident symbol above it is the Greek letter psi, also the symbol for psychology (Billy’s wife is a psychologist). The metal letters below it, “MF Interpreter,” stand for Mindfield Interpreter, a role that Beth has assumed on occasion.

The crescent-topped spire is currently the tallest point of the Mindfield. Cut into the web of the uppermost beam are silhouettes of three sets of hands (Billy and his two brothers) and a heart (Billy’s Mom). “I call that my Dad’s grave marker,” said Billy, “although he’s not buried there.” 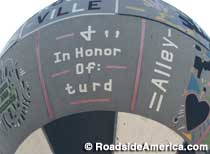 In Honor of: Turd is painted on the bulbous upper part of the Mindfield water tower. “Most people think it’s a nickname,” said Billy, but he meant it as a way of saying that the lowliest thing is still worthy of respect. Billy said that he had a “backup plan” in case the town demanded “turd”s removal: bookend it with the letters S and Y, making it “In Honor of: Sturdy.”

Sections: Attraction News Comments Off on Decoding The Mindfield

344 W. Main St., Brownsville, TN
Directions:
On the west side of downtown, on the south side W. Main St./Hwy 54, next to the Sunrise Inn motel and a big water tower, which is also part of the Mindfield.
Hours:
Lit at night - when lightning strikes haven't knocked out power. Local health policies may affect hours and access.
Admission:
Free.
RA Rates:
Major Fun