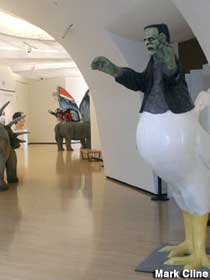 Mark Cline, creator of Foamhenge at Natural Bridge, Virginia, has been building fiberglass monsters, dinosaurs, and freaks for the tourist attractions of America for decades.

Now the Taubman Museum of Art believes that shambling mob may qualify as an ouevre. The museum worked with a Roanoke art professor to choose twenty of Mark’s pieces to exhibit, everything from the terrifying Frankenchicken to a statue of Mark standing atop a sewer pipe, holding hands with Mr. Slime.

“It’s the kind of work that would’ve been kept at arm’s length five years ago,” said Mark, who’s as baffled as anyone at the shift in attitude. “Everything’s become too CGI, too clean,” he said, his guess as to why his work is now considered an American art form. 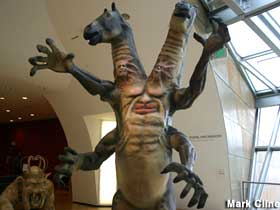 Mark found it strange to see his work in an art museum, where people had to pay to see it. He vowed that its status as art would be brief, and that it would quickly return to its roadside restaurants and dinosaur parks and his own Haunted Monster Museum so that the public could enjoy it again. He resisted the urge to read any deeper meaning into his work. “The only reason my stuff exists is to put smiles on people’s faces,” he said. 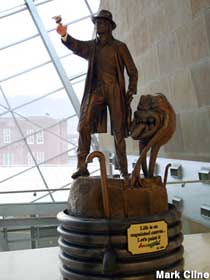 The art museum gig is only one manifestation of Mark’s new-found fame. He’s currently being courted by a reality TV series, a couple of regional art expos, and when we spoke he had just returned from Wildwood, New Jersey, where he and his crew had been flown by private jet to consult on a job. A wealthy client from Alabama has contracted with Mark to build a private Stonehenge and “a 12-foot-tall woman’s head and knees,” whose precise purpose Mark did not discuss.

Back at the museum, Mark was obliged to give a talk before an audience of “the hedge fund managers, the bankers, the people with the money,” he said, and provided each of them with a whoopee cushion, which he then instructed the crowd to sit on simultaneously.

Sections: Tourism News Comments Off on Sign Of The Apocalypse? Mr. Slime Is Art