It was axiomatic that the battle for the World’s Largest Cuckoo Clock would get a little bonkers. 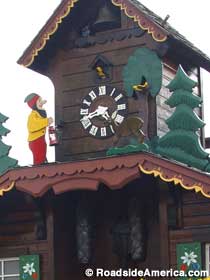 By early 2011 the title had become so debased that a “World’s Largest Cuckoo Clock” briefly appeared in Hollywood — but it was just a cuckoo clock facade, hung from the side of an office building, where every hour a different unfortunate human actor would pop out and perform as the cuckoo.

Destabilized, split with counter-claims, the cuckoo clock world yearned for a clear champion — and it may finally get one when the clock generally regarded as the World’s Largest, in Sugarcreek, Ohio, gets its cuckoo back after three years in exile. 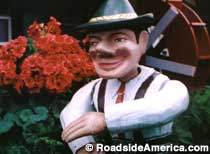 The clock was built as a strategic response to yet another World’s Largest Cuckoo Clock in Frankenmuth, Michigan (which, dethroned, was quietly dismantled in 2005). Over 23 feet tall and 24 feet wide, the Sugarcreek clock is all clock, with innards that are a maze of mechanical parts and 1972 transistor technology.

The mayor paused for breath.

“It takes a lot of mechanisms to make that happen. When I opened up the door in back for the first time I just said, ‘Wow.'” 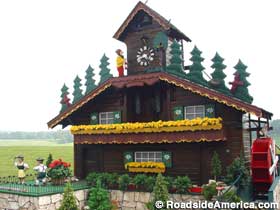 Sugarcreek acquired the clock in 2010 after its original owner in nearby Wilmot went out of business. At that point the clock had been broken for a year, and it would take another two years to disassemble, move, and restore the clock to working condition. Still, in an age where we throw away smart phones every 12 months, it’s impressive to hear of a clock that’s still ticking after 40 years. “We even have the original eight-track tapes that the music played on,” said Mayor Weller.

Finally, to cement the title, Guinness World Records has been invited to the clock’s official unveiling on November 23 to verify that it is indeed the world’s largest. “It has to work as a real cuckoo clock, like you’d buy at a store,” said Mayor Weller, confident that his clock will be crowned the largest in the world. “A lot of work went into it,” he said. “Everybody says it’s never looked as good as it does now.”

Sections: Attraction News Comments Off on Time To Crown A Champion Cuckoo Clock