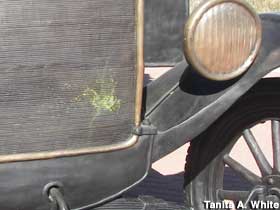 The line dividing “east” from “west” may seem more philosophical than geographical. But that didn’t stop Tulsa, Oklahoma, from spending six years and $1.2 million to claim it.

The exact spot is now marked by an impressive, large bronze sculpture titled East Meets West, unveiled November 9, 2012. According to one of several plaques that surround the statue, it stands at “the point where the landscape begins to change” and therefore marks the division between the claustrophobic green East and the wide-open brown West.

Aside from its cartographic significance, the statue is packed with Route 66 symbolism. It depicts “a fictitious but probable encounter” in 1927 between a Model-T (the East) and a Tulsa oil field wagon pulled by two terrified horses (the West). 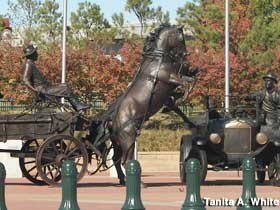 The car carries the family of Cyrus Avery, “The Father of the Mother Road,” who in the 1920s successfully lobbied Congress to make Route 66 a national highway, and who also convinced the Route 66 Commission to run the road through Oklahoma. His persuasion was greatly aided by Tulsa’s 11th Street Bridge, the first concrete bridge west of the Mississippi (an important consideration for a national highway), which crosses the Arkansas River just beyond the sculpture.

The artwork, which spans 40 feet and weighs ten tons, took six years for Robert Summers to bolt and weld together out of almost 1,000 separate pieces of bronze. Its detail is obsessively impressive, from the embossed lettering on the car’s Firestone tires to the decorative perforations on Avery’s leather dress shoes. Summers even included a grasshopper, smashed against the car’s radiator, dyed green. For all of the sculpture’s complexity, Summers has said he had the most trouble rendering the Avery’s pet cat, which claws the air in terror from the car’s back seat. 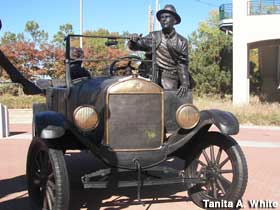 The only thing symbolically unsatisfying about East Meets West is that the way west is blocked. The 11th Street Bridge still stands, but is fenced off; it was replaced by an adjacent bridge in 1980. Visitors to the sculpture can only stare at the historic original span, now too crumbly to cross, through a decorative gate topped with a Route 66 logo.