Building the Roadside Capital of the World 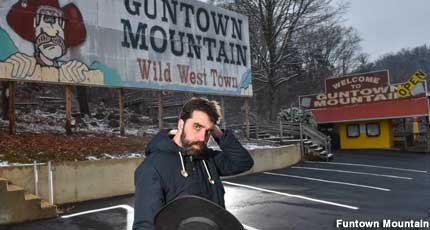 Cave City, Kentucky, is the Roadside Capital of the World.

The world doesn’t know that yet, but Will Russell does.

Will is the 21st century P.T. Barnum behind Lebowski Fest (the annual multi-city celebration of the film The Big Lebowski) and WHY Louisville (a retail attraction that ennobles the quirkiness of his hometown).

But Will is prepared to expand his horizons, to graduate from promoter to builder, from Barnum to Disney. Cave City is the canvas on which he intends to create his masterpiece.

“I want Cave City to be a Land of Roadside Attractions,” Will told us. “I genuinely feel like I have been preparing my entire life for what I am about to do.”

(Full disclosure: Will tells us he was propelled down this path partly by his purchase of the Roadside America App for iPhone. “That app changed my life,” he said. “I will testify publicly on that. It turns any vacation into a great vacation.”) 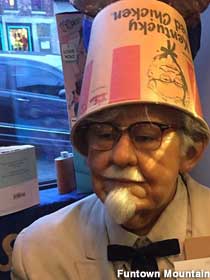 For starters, Will is buying the old Guntown Mountain attraction in Cave City, just off Interstate 65. He plans to kick out the guns and transform the place into Funtown Mountain, a pop culture Valhalla for fans of post-ironic fun. It will include, among many attractions, a Kraken Waterslide; the Sunset Dragon (“which you can walk up into and watch the sunset from the mouth”); an Ewok-inspired Treetop Village; and the ImaginationLand Museum.

“The ImaginationLand Museum was inspired by the Alamo tour in Pee Wee’s Big Adventure,” said Will. “There’ll be a series of terrible dioramas, just horribly done. Chicken wire. Body organs. I’m gonna have a whole wall of singing taxidermy.”

The side of Funtown Mountain facing the interstate will be enhanced with Kentucky Rushmore, an idea bubbling in Will’s fever-brain since 2011.

“I imagine,” said Will, “eventually I’ll just grow a big, weird beard and move up on top of the mountain.”

Yet Funtown Mountain, fantastic as it sounds, is just part of Will’s plan for Cave City. 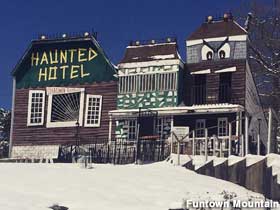 “Cave City is already incredibly special,” said Will. “It already has Wigwam Village and Big Mike’s Mystery House and Dinosaur World. All that’s needed is for someone to shine a light on it.”

First, Cave City will be branded the Roadside Capital of the World, or the Roadside Attraction Capital of America, or something like that. “It is because we say so,” said Will, who plans to use his social media clout to make it happen. “It’s easy to do. And everybody’s already, ‘Okay, cool.'”

Next, Will plans to erect “See Cave City” billboards up and down Interstate 65, inspired by the iconic See Rock City barns and the stark “Jesus Saves, Hell is Real” billboards familiar to any modern freeway traveler. “We will hype this town for hours,” said Will. “And when you get to Cave City there’s already a giant dinosaur by the side of the road!” 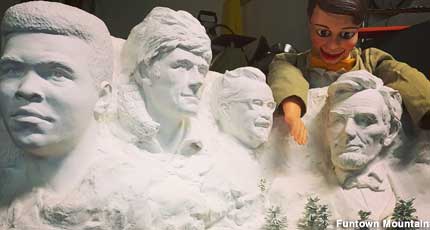 Finally, Will intends to become the town’s principal property owner. “Cave City is for sale, man, and I aim to buy it,” he said (This includes Wigwam Village, where Will said he eventually wants his ashes scattered). Cave City will rise from its long sleep as a remodeled, self-contained tourist destination. “Part of the reason is defensive. I don’t want Walmart coming in there. I don’t want adult books stores. I want Cave City to be an affordable family experience. I want people to spend a weekend there.”

Kicking all of this off is the Carnival of Fun/Funtown Mountain Wondershow, which will be departing Louisville on April 17, with stops and shows in Indianapolis, Chicago, Milwaukee, St. Louis, Nashville, Memphis, Lexington and then Louisville. Packed into an airstream trailer, among many marvels, will be a live band, a Colonel Sanders dummy in a remote control wheelchair, and a performing chicken.

Funtown Mountain is scheduled to open on June 19.

You may be asking yourself: Where is Will getting the funding to accomplish all of this? “We’re getting lots of money coming in from lots of places,” Will told us, citing several impressive and deep-pocketed business partners and funding entities. “It’s gonna happen. There’s no way to stop it.” 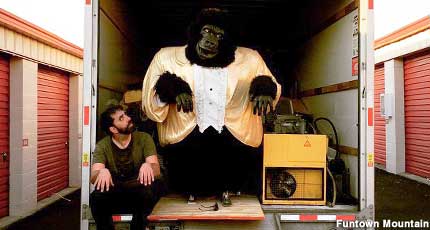 3 Responses to “Building the Roadside Capital of the World”