« Dr. Mütter: Surgeon Behind the Specimens | Main | Building the Roadside Capital of the World » 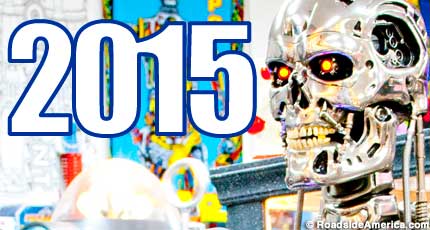 We’ve been at this game long enough to know that promised roadside wonders have a way of vanishing like icy beverages out of a back seat cooler in July. Rumors, press releases, and premature news stories set the stage for disappointment. And yet, 2014 was a year when many promises came true, even those that sounded preposterous just a year ago.

There really is, right now, an 11-story-tall statue of Pegasus killing a dragon in Miami, and a giant slot machine that spits out people on a zip line in Las Vegas. The Morbid Anatomy Museum opened as promised in New York City, and 2014 saw the surprising return of old favorites such as the Rocky and Bullwinkle statue, the World’s Tallest Grandfather Clock, and the Recycled Roadrunner. Even the World’s Largest Thermometer has been switched back on. 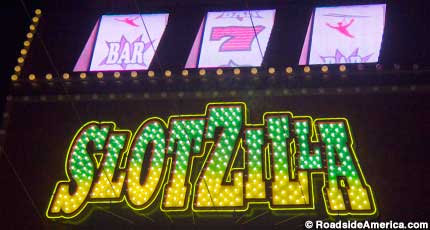 And for 2015? It should be the year that the future is decided for Foamhenge, which will either remain as part of a new state park or will be moved to one of several nearby towns vying to be recipients of its mysterious tourist-attracting powers. We’ve seen reports that the Palace of Depression, a construction project decades in the making (although that’s not why it’s depressing), may finally open to the public in 2015, as may the long-abandoned Holy Land USA after an extensive clean-up. The Tank Museum, which was supposed to move last year, may move in 2015 or it may not: tanks are not easy things to move. The same issues with mass have impeded the relocation of the World’s Largest Fire Hydrant, which was supposed to move in 2014 until it was learned how much it would cost. 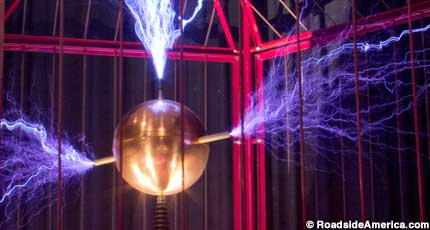 Definitely scheduled to reopen in 2015, after lengthy closures for repairs, moves, and upgrades, are the Cincinnati Police Museum (with its stuffed hero police dog), the Mid-America Science Museum (with its lighting-spitting Tesla coil), and the Texas Musicians Museum (with its slightly used coffin of The Big Bopper). The Dillinger Museum will be a welcome site of blood and mayhem when it reopens in March, as will America’s Largest Pyramid (in April), and America’s only floating bridge (in May). The bridge has been closed for seven years; the pyramid for eleven.

New attractions promised for 2015 include the Space Shuttle Independence, a full-size Shuttle replica bolted to the roof of a real 747 in Texas, that you’re supposed to be able to walk through and strap yourself into; a giant Kraken sculpture busting out of the streets and sidewalks of a town in Oregon; a Museum of Osteology (human and animal bones) that will open in Orlando; and a huge statue of Christopher Columbus, as big as the Statue of Liberty, which is supposed to go up in Puerto Rico. Oh, and the RoboCop statue in Detroit, which was originally promised for 2011, then 2012, 2013, 2014, and now 2015. Goes to show that building things in the real world takes time.

Of course, every year there are complete surprises. At this time in 2014 we knew nothing of Shark Girl, or Machine Gun America, or the Giant Licking Cat Head. What unforeseen marvels await in 2015? Dunno — but we’ll tell you about ’em when we do!