Exotic World Back as Burlesque Hall Of Fame

For years, a ranch out in the Mojave Desert was the home of he charming Dixie Evans (the former Marilyn Monroe of Burlesque) and Exotic World, the planet’s only museum and hall of fame for strippers. 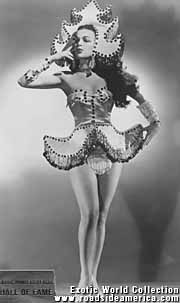 In 2006, however, the ranch changed owners. Dixie had to pack up all of her tassels, G-strings, and unique stage props, and move away. America has been a bit sadder — and a lot less glittery — ever since.

But our long Burlesque-less drought has finally ended, with the opening of the new Burlesque Hall of Fame in Las Vegas, Nevada.

Dixie has turned the business of her collection over to others, but we’ve been told that she’s still very much involved and that her curatorial skills — she’s known many of the most famous strippers personally — have been invaluable.

The Hall occupies a small space within the larger Emergency Arts building. Dixie’s collection is so vast that the Hall of Fame plans to cycle in completely new exhibits every couple of months. Hopes are high that the Hall may soon double in size, and eventually take possession of an old downtown Las Vegas theater where performers like Sheri Champagne and Tempest Storm once bumped and grinded.

For now, everyone’s just happy to see Dixie’s sequined pasties and garter belts back out of mothballs. The Hall’s opening was reportedly attended by famous strippers such as Kalani Kokonuts, and by the mayor of Las Vegas.

More on Burlesque Hall of Fame

2 Responses to “Exotic World Back as Burlesque Hall Of Fame”