JFK Murder Taxi One Of Many New Marvels In Roscoe

Wayne Lensing shops hard so the rest of us don’t have to.

We talked with the automobile/pop culture collector after learning that he’d just bought the Dallas taxicab that Lee Harvey Oswald hopped into after he (allegedly) shot JFK.

Wayne reportedly paid $35,750 for the 1962 Checker cab, which had been on display south of Dallas at the now-defunct Pate Museum of Transportation. Later this year the cab will join Wayne’s other one-of-a-kind exhibits at his Historic Auto Attractions museum in Roscoe, Illinois.

“But I’ve already got the tombstone on display,” Wayne said. The tombstone? He told us that last month he purchased Lee Harvey Oswald’s original tombstone. It’d been stolen from Oswald’s grave in 1967 and only recently rediscovered, hidden in a crawlspace under the house of Oswald’s long-dead mom. Now it’s part of Wayne’s extensive JFK assassination collection in his museum, joining Oswald’s ambulance of death, the hat and shoes worn by Jack Ruby (who shot Oswald), and, soon, the taxicab. 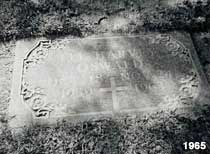 Wayne has also been busy shopping for other parts of his museum. From Texas he acquired full-size mockups of a Mercury space capsule, an Apollo moon capsule (complete with astronauts), and a Lunar Lander — as well as a space couch used by Ham the Astrochimp. All are now exhibited “back by the Bigfoot truck,” according to Wayne, until he can find more room. And from the Hollywood Wax Museum rummage sale he acquired dummy dioramas of the TV shows M.A.S.H., All in the Family, Star Trek, and Happy Days, which Wayne has set up next to his Sanford and Son display. “Now it’s all like TVLand.”

But of all of his recent acquisitions, Wayne sounded most excited about another purchase from the Pate Museum, a 20-foot-wide wingspan model of a Boeing 707, “exactly like the one that JFK flew in.”

“It’s huge!” Wayne said. “I want to paint it up like Air Force One and maybe have miniatures of Jack and Jackie walking down the ramp onto Dallas Love Field.”