The Cathedral of Junk in Austin, Texas, may yet dodge the wrecking ball. 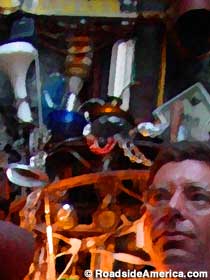 Since early March, Cathedral-builder Vince Hannemann and his creation have been hammered by cudgels of bureaucratic chaos. It began on March 10, when a city official knocked on Vince’s door and said that his massive backyard artwork — which had stood since 1988 — had to conform to code in seven days. Vince knew that it was impossible and announced that the Cathedral would have to be destroyed. But an army of volunteers arose, and within weeks they had hauled 25 tons of scrap metal out of the Cathedral. “It would have taken me years,” said Vince.

The nightmare, however, wasn’t over. An engineer hired to certify the Cathedral quit. Then a second one did likewise. Then the city announced that Vince could no longer keep reducing the Cathedral in size, since he hadn’t applied for demolition permits. Vince again threw up his hands and declared that the Cathedral would simply be leveled.

A red “Hazardous Conditions Exist” sign now stands in Vince’s front lawn. He’s not allowed to remove it, and he’s not allowed to let anyone in. Yet the Cathedral still stands, if in limbo and smaller in size. Vince sees a bright side. “It doesn’t hurt to be labeled an outlaw,” he said. “Ever since this happened I’ve had way more drive-bys, people peeking over the fence like they’re doing something bad. ‘Oooh, look at the forbidden art!'”

And for the first time in months, Vince is guardedly hopeful. The city seems to have softened its tone, realizing that its Kafkaesque crackdown was winning it no friends. “Once I get a letter from an engineer (the third) — and knock on wood I will — then I’ll be able to let people in again,” Vince said. “Who would’ve thought that you hang hubcaps on a fence, and one day you’d be dealing with lawyers and engineers and architects and politicians? Haven’t they got more important things to deal with than this?”

(Thanks to Kenny Mcdougal for the tip!)

More on Cathedral of Junk