« Legend of Hermann the German: Footnote in History? | Main | Tales from Trundle Manor » 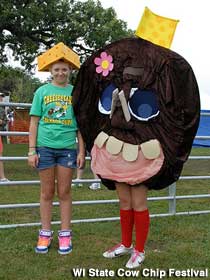 The twin villages of Sauk City and Prairie du Sac, Wisconsin, proud as they are of their annual Wisconsin State Cow Chip Throw and Festival, admit they were not the first to celebrate the bovine natural resource. That honor, duly acknowledged by the towns, goes to Beaver, Oklahoma, the Cow Chip Throwing Capital of the World.

But Sauk City and Prairie du Sac are quick to assert that their dung toss has surpassed Beaver to become the biggest such celebration in the world. Given the amount of artistic effort channeled into their annual Labor Day Weekend event — including Cowabunga, a 14-foot-tall “Trojan Cow” that lifts its tail to make deposits during the Tournament of Chips Parade — the twin villages are now front-runners in this rear-ended contest. 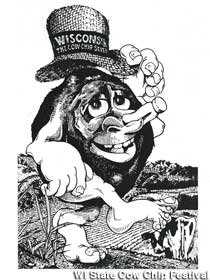 Sauk City and Prairie du Sac forged their bond with cow chips in 1975. Back then they were imitators; even their early, and still official, mascot, Dinochipus Wisconsinus, appears to have been inspired by Beaver’s “King Cow Chip” (Both mascots are turd-rific). But over the passing decades the twin villages have developed their own cow chip identity, creating new themes each year that are visualized by local artists. The themes have ranged from 9/11 (2002) to James Bond (2007: double-o-seven, get it?), and sometimes relate to nothing in particular, such as a psychedelic hippie theme in 2010. The common thread — in case anyone ever wonders what links, say, the Gulf War and the Green Bay Packers — is the cow, her fecal bounty, and well-designed Wisconsin State Cow Chip Throw t-shirt. 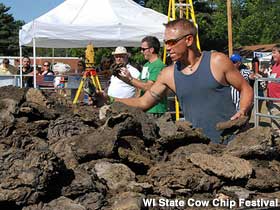 Marietta Reuter, chairwoman of the festival, told us that the relative narrowness of the hurling field in the twin villages has spawned another innovation, “chip deflectors.” At first they were shaped like the clothespin-nosed Dinochipus and were wielded like miniature shields-on-a-stick. Later versions, modified every few years, resemble cow heads with eye holes and are worn as masks. “I particularly love it when the chips hit the fans, because that happens a lot,” Marietta wrote us in an email, explaining the need for the deflectors. “One year I saw the same person get hit twice. You would think you would start paying attention after you got hit once.” 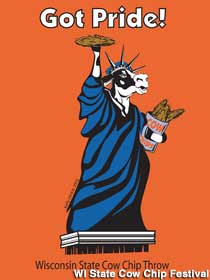 The entire 15-member Chip Committee, including Marietta, heads out into the local fields in late July to gather the crop. “When you see a good chip, you know,” she told us. Good chips, however, have been hard to find of late; a hot, dry 2012 led to a cow chip drought, and too much rain in 2013 made the chips crumbly (and unpleasant to harvest). Substandard chips don’t restrict the contest, but they do almost guarantee that no throwing records will be broken. Still, the 40,000 fans who attend the Wisconsin festival each year haven’t seemed to mind.

Marietta said that those who miss the event can track down chip souvenirs year-round at the Sauk Prairie Area Chamber of Commerce office. And while there’s no giant, permanent photo-op monument to the Wisconsin cow chip — yet — Marietta said that she and the art-savvy Chip Committee would think about one.