Legend of Hermann the German: Footnote in History?

New Ulm, Minnesota, has for years been enticing tourists with its Germanic attractions: a glockenspiel, beer pubs, and a really big statue of Hermann the German (Third largest copper statue in the U.S.). In 2012 the town sought the help of a Minneapolis marketing firm, which coined the slogan, “Germans Have More Fun” and transformed a Hermann bobblehead into a town spokesman with his own Twitter account. In January 2013 the campaign won a state tourism award. 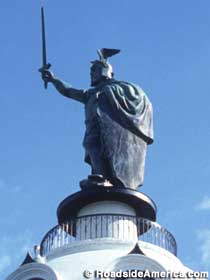 “We thought, ‘Hey that worked out pretty good,'” said Terry Sveine, manager of the New Ulm Convention and Visitors Bureau. “‘Now let’s try for something big.'”

What the town wanted was a legend — an attraction that would last longer than a tweet or even a slogan.

“Like the Blarney Stone,” said Terry. “You really don’t believe that kissing a grotty old stone in Ireland is gonna give you luck, but you buy into it and do it.”

The legend, it was decided, was that the Hermann statue had left behind a huge footprint, fossilized with age, and it had recently been unearthed in Glockenspiel Park (An approach similar to the wildly successful Cardiff Giant hoax). People would visit the footprint in the park, and touching it would bring them more fun, which would reinforce the Germans Have More Fun theme. 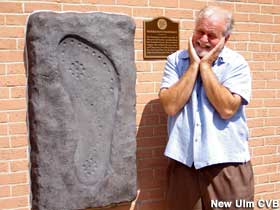 But since this would be a permanent attraction, who would guard the footprint in the park? Who would clean out the leaves and dirt? What would happen if it froze (this is in Minnesota, after all), and cracked?

Preservation and convenience held sway, and it was decided that the footprint should instead be mounted on an outer wall of New Ulm’s downtown Chamber of Commerce building — where it was unveiled with much local fanfare on July 17, 2013. But to justify that unusual spot, the footprint needed a new backstory. And that’s where it got New Ulm into trouble.

In the new version, the footprint was an ancient artifact that had just been rediscovered in a crate in the Chamber of Commerce basement. It had been hidden there for nearly a hundred years — since the start of Prohibition, according to an accompanying note — because people had been having too much fun in New Ulm (remember all those beer pubs).

The Minneapolis marketing firm issued a press release with the story and set in motion a series of media rollouts, including a video of two fake “mythbusters” finding the note. “I made a wood crate, and they staged some crap around it to make it look like it was long-lost and dusty,” Terry said.

The media ate it up — too eagerly. The story was picked up by the wire services and Terry found himself talking to an Associated Press reporter, who was checking the facts. “He asked me, ‘Did you create this?’ and I said, ‘Oh, no, we really found it!'” said Terry. “I thought, ‘We’ve created a legend, we can’t really backtrack now… that would shoot the whole concept in the foot, ha-ha.'” 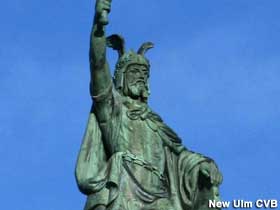 But when he hung up the phone, Terry had second thoughts. “You know, I just lied to the AP,” he told himself. “Is that gonna bite us on the backside?'”

Terry decided to call back the reporter and tell the truth. The headline of the resulting story read, New Ulm Tourism Chief Admits Faking Story.

“I’m a national liar!” Terry said, excited and happy about the way things turned out. “That got us more press than anything!”

Sections: Attraction News Comments Off on Legend of Hermann the German: Footnote in History?

Big Footprint of Hermann the German

1 N. Minnesota St., New Ulm, MN
Directions:
Downtown, on the outer wall of the New Ulm Chamber of Commerce and Visitor Center. On the north side of Center St. just west of its intersection with N. Minnesota St.
Admission:
Free