Castle at the End of the Enchanted Highway

For the past two decades, Gary Greff has been building the world’s largest metal sculptures along The Enchanted Highway, trying to lure travelers off the interstate to his hometown of Regent, North Dakota. 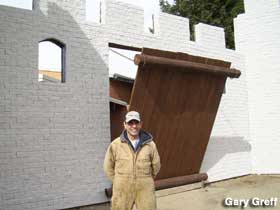 Gary estimates that thousands of travelers have driven the 32 miles from I-94 to Regent over the years. But once they arrived in the town of 160 people, then what? “I needed something at the end of the Enchanted Highway,” said Gary. “If we were ever gonna make Regent a destination, we had to have a place for people to stay.”

So Gary bought Regent’s old high school (he was a member of the Class of ’67) and transformed it into a motel. He wanted to follow the theme, “and when you think of something enchanted,” said Gary, “you think of a castle.” 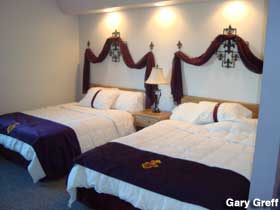 On May 7, 2012, Gary completed Phase 1 of The Enchanted Castle, the only medieval theme motel in Regent — the only motel, period, in Regent. That afternoon a young couple drove down the Enchanted Highway, heard about the Castle, stopped by, and became its first overnight customers. “We took them to the hot tub room, gave them some mints,” said Gary with a laugh. “I didn’t know how else to make it special.”

Gary and his brother, novices at castle construction, built theirs by looking at photographs. It has a working drawbridge and 2-D battlements, with lots of brick, suits of armor indoors, and medieval touches in each of its 23 former classrooms, now mini-suites. A portcullis will guard the entrance as soon as Gary can finish building it in Phase 2. The school’s gym was left untouched, Gary said, as a way of keeping the old school alive and preserving a piece of the town’s history. 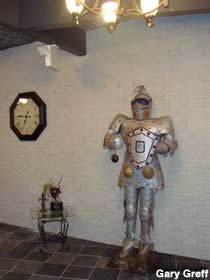 Gary hopes that the income from the Castle will help fund all of his other, future projects. “I’m not invincible,” he said, “but I also know that no one else is gonna be as crazy as I am.” His next creation, also in town, will be the World’s Largest Motorcycle, a sculpture that Gary hopes will attract riders, ralliers, and motorcycle clubs to Regent who might already be in the neighborhood — say, in North or South Dakota.

We’ve been charting Gary’s projects for years, which he calmly accepted as natural when we spoke with him, even as he labors in relative isolation. “Whether you realize it or not, you guys are part of my enchantment,” he said, laughing again. “I knew I picked the right name.”

3 Responses to “Castle at the End of the Enchanted Highway”