« Castle at the End of the Enchanted Highway | Main | Frozen In Concrete: Kansas And The Ice Age » 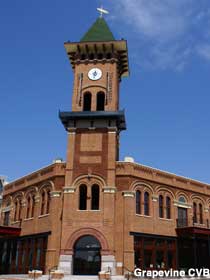 The tower glockenspiel, a huge clock with little animated people that move around beneath its dial every hour, is usually found in medieval downtowns in Bavaria and Switzerland. Rarely built in the U.S., most of them are in spots trying to channel schnitzel and sausages: there’s one in New Ulm in Minnesota, another in Mount Angel in Oregon, a third in a German meat market in Muenster, Texas.

Now a new American glock has arrived, the Cotton Belt Hotel Clock Tower glockenspiel in Grapevine, Texas. Unlike previous glockenspiels, its robots are not lederhosen-wearing Germans, but gun-slinging Lone Star State cowboys. Their big debut, after years of planning, was May 18, 2012.

The Wild West meets Olde World Europe in Grapevine every day just before noon and 6 p.m., a schedule timed to draw people downtown for lunch and dinner. Two nine-foot-tall robot cowboys emerge from either side of the clock tower, 75 feet up, their chaps flapping in the breeze (they stay inside if it’s stormy or very windy). The cowboys’ voices, amplified over loudspeakers, make it clear that they’ve both arrived in Grapevine to rob the same train. After some brief name-calling, and with the herky-jerky movements that we love in our robots, they draw their six-shooters and blast each other. 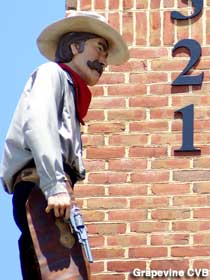 A computer randomly selects which cowboy is the winner (even the loser isn’t badly hurt), the two robots realize that their fighting has made them miss the train, and they reenter the clock tower the best of friends, having learned that crime does not pay. The gathered crowd, sitting on bleachers in a viewing plaza across the street, leaves with the satisfaction of a happy ending and an urge to eat in one of Grapevine’s downtown restaurants.

The robots were built in Ohio, at a cost roughly equal to a modest-size Grapevine home. Oddly enough, Grapevine is a Texas town where no Old West gunfights ever took place; the glockenspiel cowboys and train robbery are pure fiction. The town is principally known as the gateway to Dallas-Fort Worth Airport — and now for a rootin’-tootin’ robot glockenspiel.